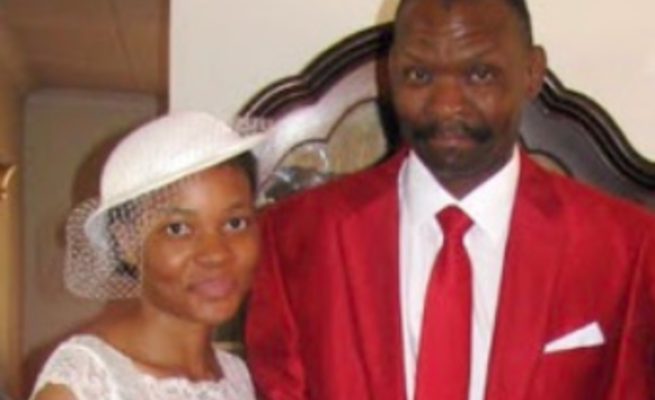 THE estranged wife of Michael Sandlana, the leader of a faction of the International Pentecost Holiness Church, has opened a case of fraud after she was declared dead in order to place her estate under her husband as the executor.

Magalane Benedicta Sandlana (29) lodged the fraud case with the Sandton police on Friday after she discovered that a death certificate had been issued in her name on April 14. Magalane said she made the discovery after she battled to make transactions on her bank account last week.

“I was shocked. Someone wanted to deposit money into my account and there was a problem. I went to the bank to find out what the problem was and that is when I was informed that my account was closed because I was dead,” said Magalane.

She further told Sowetan that when she went to Department of Home Affairs offices in Johannesburg to verify news of her death she was given a copy of her “death certificate”.

The certificate indicated that she had “died” on March 16 from “natural causes”.

“I then got information that there was an estate file that was opened at the master of the high courts using my death certificate,” she said.

The notice of death and request for letter of executorship of Magalane’s estate made to the Master of the High Court in Pretoria on April 9 bears the names and personal details of Sandlana, the leader of a faction head-quartered at Jerusalema, near the town of Brits in North West, as well as his purported signature.

The notice was submitted along with certified copy of Sandlana’s copy, the couple’s marriage certificate, the “death certificate”, inventory of properties, a nomination form, acceptance of trust as executor, an affidavit and ID copy of Magalane. According to the documents, Sandlana was to inherit three properties with a total value of nearly R1.5m. The documents were issued in the letterheads of MA Ramothwala Attoneys.

Lawyer Ali Ramothwala from the law firm confirmed to Sowetan that he represents Sandlana but refused to answer question related to the matter.

Magalane said on the day she was declared dead she was in Johannesburg to handle personal matters.

“I didn’t know that it was the day I died,” she said. “I want my life back because I am now walking dead and I want to see justice being served on this. I wanted to register at Unisa but I can’t because I am declared dead. My two bank accounts have been closed — I have to live off the kindness of my family and friends because I do not have access to my money.”

Gauteng police spokesperson Cpt Mavela Masondo confirmed they were investigating a case of fraud in connection with the issuing of Magalane’s death certificate. Masondo said no arrests had yet been made.

Sowetan attempted to reach Sandlana for comment through at least nine cellphone numbers provided but they all went unanswered and texts messages with a list of questions had also not responded to at the time of going to print.

Magalane, who has been married to Sandlana, 60, since 2017, said she reported the matter to the department of home affairs in a bid to find out how she was registered as a deceased person.

The department’s spokesperson, David Hlabane said: “Please advise the client to report at one of our home affairs offices so that the matter can be investigated swiftly and resolved.”

A department employee who cannot be named as she is not authorised to speak to the media told Sowetan the certificate was issued at the Mabopane home affairs offices. “The problem is that we don’t know who issued it,” she said.

Sowetan has also seen three letters sent by Magalane’s lawyer, Arnold Joseph, and addressed to Sandlana ’s lawyer, the department of home affairs, and the master of the high court in which she seeks clarity on the application while she is still alive.

Joseph said Sandlana had “unlawfully and wrongfully reported my client’s death to the department of home affairs and has obtained a death certificate” .

The letter further alleged that Ramothwala Attorneys was usedas an agent to “wrongfully and unlawfully report the alleged deceased estate of my client, who is alive and well, to the master of the high court”

News Cynthia Goba - 11 May 2021 0
A 24-year-old Zvishavane man has been sentenced to 33 years in prison for rap_ing and deliberately infecting his nine-year-old niece with HIV. The niece is...
Loading...