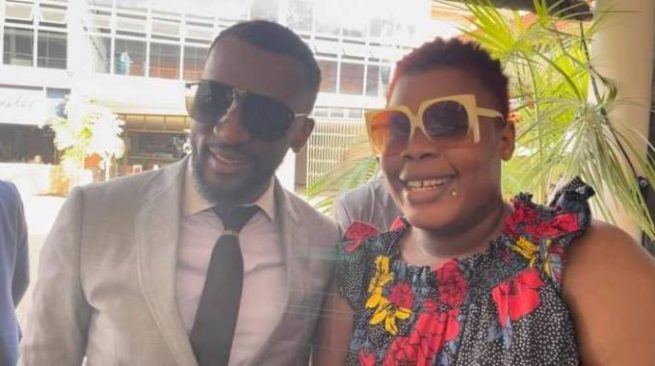 Evidence Jiri’s unexpected visit to the man of cloth raised eyebrows following her recent confession that she dumped gospel music over bedding several men among them men of cloth.

Jiri, the woman behind ‘Team Chihera Gossip Family’ confirmed visiting Prophet Passion and described him as a true man of God

“If I am to be asked to name one of the real prophets in this country, I would not hesitate to mention Prophet Passion because of his way of life,” said Chihera.

“Many prophets and pastors are trying to live unpractical life on earth in an effort to impress people, forgetting that they are human beings.

“Prophets and pastors are not different from any of us and our flesh, especially our private parts take time to adjust to spiritual power.

“I am surprised to find out that some of these men of cloth criticise Prophet Passion over what he does and posts on his social media pages.

“Commenting on his posts shows that they are following him and they must learn from him that helping people is what matters most rather than trying to impress people by pretending to be holier than thou.

“Prophet Passion ministers well at church and knows to give better life to his community away from the pulpit.

“You cannot feel out of place when you are with Twabam; he makes you laugh always which is practical and realistic.

“Those who accuse him of bedding several women are running away from the fact that we are human beings going through sanctification and awaiting to be glorified,” said Chihera.

Chihera denied ever luring Prophet Passion saying she was accompanied by some artists she wanted to introduce to the man of cloth.

“My visit to Prophet Passion was to seek ideas on my new project ‘Get to know them’ that will see me meeting upcoming and legendary artists,” she said.

“I do not mix business and the old profession,” said Chihera.

In a video footage captured during Chihera’s visit at the offices, which has since gone viral, Prophet Passion is seen showing her all the rooms and responding to questions over bottles of Champaign she saw displayed in one of the rooms.

Chihera confessed dating married men including several men of cloth and musicians during her gospel music career when she released two albums namely Ngandikundi in 2008 and Ndirwirei Jesu in 2010.

Chihera, who has turned to se_x work, made headlines when she clashed with Mathias Mhere over his song Favour claiming that she was the one who penned it but delayed releasing it.

“I am a musician and will remain a musician but I am no longer into gospel music because I have smeared my garments with f0rnication and adul_tery,” said Chihera.

“Music is within my veins and the same veins have dirty blood of sinning and this forced me to dump gospel music and turn to Afro-fusion.

“One of my songs I released soon after dumping gospel music is Hachisekanwi and I penned this following stigma I suffered over turning to se_x work.

“To be honest with you I bedded several married men, some musicians and even some men of cloth while singing gospel in the name of support.