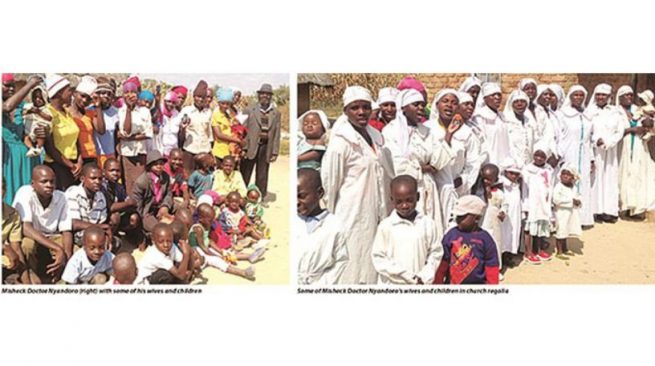 Mbire man, Misheck Nyandoro, has fathered 151 children with 16 wives and he is still counting.

“Mine is a project. This polygamy is a project that I have undertaken since 1983 and will end with my death. Whenever that day death visits, is when I will stop marrying and fathering children.

“I am planning on taking in my 17th wife this winter and the formalities are already being worked on. I will tell you when she comes in,’’ he says in a very relaxed but confident manner.

From his conundrum, 50 children are still in school in Mbire, Harare, Mutare and Guruve and little everywhere else, six are employed by the Zimbabwe National Army, two by police and 11 others are employed in different professions. He has married off 13 daughters. Two wives are pregnant. At least 23 of his sons are married, one of which is distantly following his father’s footsteps, on a count of four wives.

The project, he claims, has started working and his children pamper him with gifts daily.

“From my working children and getting pampered with money through EcoCash, almost daily and 11 of my children have put me on funeral policy. I get goods from sons-in law.”

Day after day, Nyandoro sits in his centrally located shed, eating meals, one by one, his wives bringing food for him. That is a good 16 meals!

“Every wife cooks her best everyday because the rule is I only eat what is delicious and I throw away what is not tasty. Every wife subscribes to that rule and does not get annoyed when I return her badly cooked food to her. It is the rule here. Rejected food should make her cook better next time,’’ he explains.

As he eats from that shed, Nyandoro plans that night’s duty roster for his wives’ conjugal rights and by his own admission, when planning the roster, he takes into consideration many factors. No wife knows she is on duty until he visits her bedroom.

“I married my first wife in 1983 and she is still here. I last married 2015 and stopped temporarily because the economy had become unfriendly. The New Dispensation has slowly fixed things and am getting a new one this June, she is currently in Harare and I have started the process. Had it not been for temporary economic hardships, the story would have been different, maybe getting close to 30 wives by now and 200 plus children.

“Now that the economy has stabilised, if you come back next year you will find two or three more new wives and several children, added to the number. But in the past six years, I have fathered 22 children. I am not stopping,” brags Mr Nyandoro.

“I am strong and feel as strong as I was when I was 18. I give conjugal rights to an average of four wives a night and I do the duty roaster personally. I go to the targeted bedrooms one by one. That is my job. There is no other job I do. They are all catered for and you can see they are happy. Afternoon conjugal rights are not considered during the duty roster, for, that is mainly accidental.

“You are free to interview each of them separately and in my absence. From where I stand, they are all happy! When I had five wives and below, I used to give them two-days conjugal rights duty each but as the number increased, I changed my tactics,’’ he declares.

You mean four women per night?

“Yes, four! Let me tell you the trick. It is like crop rotation in farming. The next crop is a new crop, it bbrings new energy and new dynamics.

“The moment I see the next woman, she is a completely new person and I feel like I haven’t done anything before. There is no magic but a sound mind. Never be lied to about juju or magic or anything. To me every wife is a new person. It feels different.

“When I am dealing with each wife, I tune myself to her age and demands so that we operate from the same level. What I do with the young wives is not what I do with the elderly ones. But again the reason why I am marrying two or three more in the recent future is that the elderly wives are no longer much interested in sex.

“At times I am chased away or told to go for the younger ones.”

But why so many wives and children?

“I have not stopped making babies, the sky is the limit. I have not stopped marrying either, God allowing, I will go even up to 100 wives and maybe 1000 children. Western Europe has a big project to reduce Africa’s population and am against that. I am a war veteran, the Government pays for my children’s fees. I have no problem.”

How does he manage?

“I am a very powerful, firm and principled man. Every woman or child knows it. I don’t favour anyone. I am in charge. My oldest wife has the biggest number of children, 13. But I am not stopping her. As long as she can still conceive, it is game on.

“Two other wives gave birth to 12 children each and they might still be going.

Nyandoro’s family mainly relies on farming, courtesy of the land reform programme and after each harvest, he shares accordingly.

At the moment he has been newly allocated 93 hectares near Mvurwi Mountains, to carter for his huge family after the Government realised he needed more land.

“I have started moving to this new place. My wives will now all come to this place because where I was in the village the land was small, then the land I got during the land reform the first time was small. So am happy with the new land,’’ he says.

“I have paid lobola accordingly. None of the wives was organised for me. I approached each one of them personally. Of course, these women have small camps but I manage them.”

In 1977 he joined the liberation struggle and was trained at Mgagao Camp before coming back to operate in the then Dande Tribal Trust Land as a medic. It is there, that he saw his colleagues dying at the hands of the Rhodesian army and vowed to replace them by siring many children, if he survived the war.

At independence in 1980, he was attested into the Zimbabwe National Army and worked briefly in Nyanga and Bulawayo. It was while at BBS Nyangombe Camp in Nyanga that he married his first wife.

He also worked at Four Brigade in Gutu, Masvingo.

At the army he rose through the army ranks to sergeant before retiring.

After marrying his first wife, the aftermath became a roller coaster of marrying until the economic hiatus restrained him in 2002.

At times he married three wives in a year. Had it not been for the economic hiatus, the story could have been different.

“I am not employed. My duty is to satisfy my wives. I know each of them personally and I satisfy them accordingly.”

Parting shot: “A man who is ruled by women has no place in Heaven.”