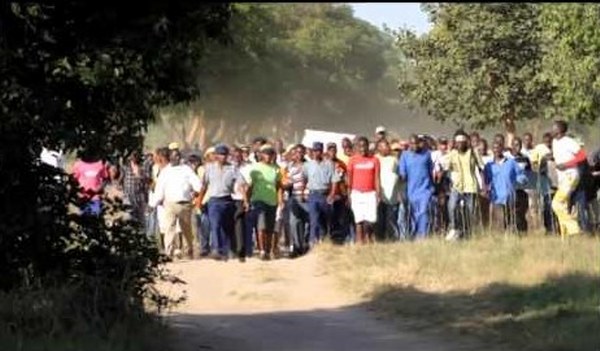 INFORMATION Deputy Minister Kindness Paradza is in the eye of a raging storm after an armed gang linked to the Zanu PF politician fought running battles against fellow party youths in Chinhoyi Saturday.

Paradza is the Zanu PF district coordinating committee (DCC) chairperson for Makonde where he is also the local MP.

Zanu PF youths are demanding Chanetsa should be removed from her post and expelled from the party, but Paradza is said to be protecting her.

Police had to fire tear-smoke to quell the riotous situation that unfolded while Paradza was convening a tense meeting with 45 Zanu PF DCC chairpersons from Chinhoyi constituency last Saturday.

The ruling party officials were forced to end the meeting abruptly and armed police officers, on standby, escorted Paradza and his security aides from the venue.

However, soon after he left the venue of the meeting, the Chinhoyi Public Service Training Centre, was turned into a war-zone as Paradza’s militia armed with machetes, stones, beer bottles, and a spear, arrived aboard his party-issued double-cab truck before unleashing violence against fellow party youths.

Sources told NewZimbabwe the meeting was briefly disrupted after some DCC youth chairpersons walked out in protest accusing the Makonde legislator of failing to take action against his ally Chanetsa, who faces disciplinary sanctions over a slew of allegations.

The meeting, sources said, only reconvened after Chanetsa was forced to leave the venue.

This is when all hell broke loose as the MP’s armed mob descended on the venue and clashed with fellow Zanu PF youths who were keeping vigil to block Chanetsa from attending the indaba.

When contacted for comment Sunday by NewZimbabwe, Paradza said he did not have any comment to make before hanging up.

“I have no comment,” Paradza curtly said. However, asked further why he didn’t have a comment, Paradza hung up.

Earlier Saturday, Paradza had attended World Press Freedom Day commemorations at Cooksey Hall in Chinhoyi while the youth gang from his Makonde constituency milled around the venue.

He uncannily told journalists attending the event he had mobilised the youths and was taking them to the DCC meeting.

The youths are believed to be the same belligerents who were involved in the bloody skirmishes that later left several party youths nursing a few injuries from the violence at the training centre.

Prior to the ill-fated Saturday meeting, Paradza was reportedly quaking in his boots after getting wind party youths were planning to protest against him.

He has previously clashed with party youths over concerns he helped his cronies rig last December’s DCC elections, and is protecting Chanetsa who is an alleged “sell-out.”

To confirm his insecurity, Paradza issued a pre-emptive notice to DCC members Thursday warning members to guard against elements bent on disrupting the scheduled Saturday meeting.

Reads the notice leaked to NewZimbabwe last week; “Hello colleagues. This Saturday we have an inter-district meeting in Chinhoi (sic). We want to have a smooth and productive meeting and l expect our leadership in Chinhoi (sic) to mobilise bonafide delegates only for this meeting.

“I also expect discipline prior, during, and after the meeting just like what we witnessed in Mhangura and Makonde. Am, therefore, directing Chinhoi (sic) leadership to make sure that we don’t have any disruptions to our meeting.”

Sensing the situation could turn volatile, Paradza notified the police.

The notice further reads; “l have already notified the police to be on standby and arrest anyone who disrupts our meeting. I expect Cde Voster (Mashevedzanwa) to do your job and you must liaise with our (state) security agencies for them to be on high alert. Thank you.”

Chanetsa, whom Paradza seeks to protect, was recently barred from attending the Makonde DCC inaugural meeting held at the same venue.

She is accused of leaking sensitive Zanu PF information to social media personality South Africa-based Gugu Ncube a.k.a “Dr. Amai”, who in turn allegedly uses it to denigrate the party and its leadership on her platforms.

She is also accused of faking her abduction by party colleagues during the emotive DCC elections last December, thereby putting the party’s name into disrepute.

Youths in the party recently signed a petition calling for Chanetsa’s ouster.