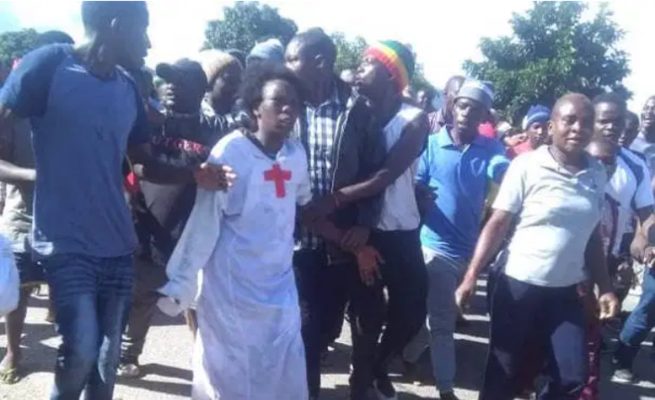 IRATE residents in Mutare’s Dangamvura high density suburb who are apparently living in fear of unconfirmed reports of the existence of ritual murderers took the law into their hands this morning and heavily assaulted a woman who allegedly kidnapped a two-year-old boy and hid the toddler in her church garments.

The suspect only identified as Melody and believed to be a resident of Area 13 of Dangamvura took to her heels after the child’s mother spotted her with the baby.

Police confirmed the incident and said investigations are in progress.

Pained to lose her baby, Ms Shylet Mudengerezwa (20) shouted for help and members of the public joined in the chase that occurred in maize fields in the Nyamauru section of Dangamvura on Wednesday morning.

After seeing that the public was closing in on her, the suspect started acting like a mental patient in a bid to attract sympathy.

She was subsequently arrested and the baby was taken into the custody of her mother.

The suspect is currently detained at Dangamvura Police Station.

This comes after a four-year-old boy was stolen and dumped after the thief was spotted on Tuesday afternoon in Glen Norah suburb in Harare.

The thief took to his heels when he was seen with the baby by the kid’s neighbour Ethel Danhire, 47, who got suspicious of this man’s movements around this boy.

The mother, who is a Harare CBD vendor, narrated how it happened saying were it not for the neighbour, the child could have been stolen.

“My neighbour from across the street got suspicious of this man’s movements around the children who were playing at my house.

“Within a short time, she saw this thief taking my child away.

“The saviour called my child by his name but my child did not respond.

“My neighbour rushed out and started shouting. That was when the thief threw down the child and ran away,” said Tambudzai Bangajena.

The woman who witnessed everything could not be located as she had travelled to her rural home but her daughter narrated what transpired.

“My mother said the suspect stopped at the gate under a tree near after reportedly targeting the boy.

“She then saw the man taking the boy away before shouting and the man threw down the child,” said the woman’s daughter.