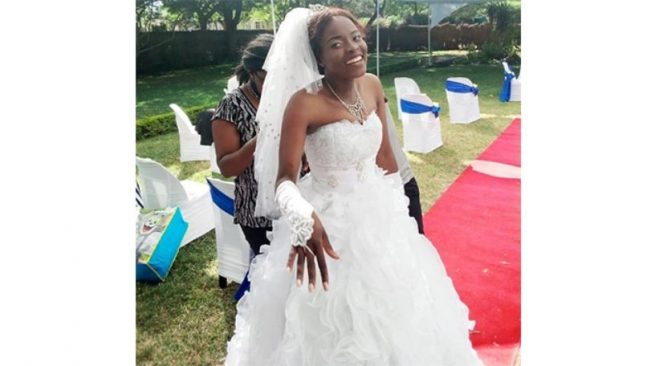 A Jambezi-based school leaver, who made headlines in 2014 after she beheaded her one-month-old baby after a serious misunderstanding with her boyfriend, has finally opened up on the issue after eight years.

Lousinonh Siziba (29), who is housed at Mlondolozi Mental Institute, said her boyfriend was the cause of the depression that drove her to slay her baby. This saw her being regarded as a mental patient.

“The story of my life really affects me a lot because it was soon after completing my Ordinary Levels when I met this guy in Jambezi and we became friends for some time and later on we fell in love just like any other teenagers in the community. I really loved my boyfriend such that he convinced me that it was high time we started indulging in se_x.

“I never objected to the idea. Little did I know that this move was going to cost me a lot in terms of my career and my freedom. I later discovered that I was preg_nant and the moment I told my boyfriend about this issue it became the turning point of our relationship,” she said.

Siziba said soon after telling her boyfriend about the preg_nancy, he told her that he had nothing to do with the preg_nancy and this left her with all the responsibilities up to the point of giving birth.

“I started suffering from serious depression when my boyfriend dumped me for having fallen preg_nant and his decision meant that I was now supposed to meet all the expenses that had to do with my preg_nancy. This situation became even more difficult for me as I was a school leaver and I was not yet employed such that I could work and raise the money that was required.

“My grandmother, whom I was staying with, was no longer working so all these factors really got into my head such that I became a depressed person for more than 10 months and my family never realised how badly affected I was. This made it difficult for me to interact with anyone,” she said.

Siziba said she tried on several occasions to reach out to her now elusive boyfriend, but he did not entertain her, instead he resorted to insulting her with derogatory names as a way of pushing her away from him.

“I really wanted my child to be raised in a normal family set-up that has got a father and mother. So, I tried on several occasions to at least talk to my boyfriend over this issue, but he would not listen to me. Instead, he started insulting me in public, calling me names and I could not take that.

“So I told myself that I was going to raise my child single-handedly, but the stress was really killing me during that time up to the point of giving birth without the support of the father,” she said.

Soon after giving birth she started having serious hallucinations for more than three weeks and she never shared the issue with anyone as she felt it was safer for her to keep most of the issues to herself.

“Soon after having given birth to my child, my family supported me, but I was being haunted by the fact that my child was going to be raised without a father which is something that I never dreamt of. This stress really affected me to the extent that I could hear and see funny visions.

“I never told my family about this issue and they thought everything was normal such that my grandmother would leave me and my younger sisters alone at home,” she said.

Siziba said on the day in question, the whole family had gone to the fields leaving her and the child at home. She started hallucinating and hearing voices instructing her to kill the child as it was causing her untold suffering.

“To be honest with you my brother, I still remember the whole process of how I killed my child, but the most painful part is I could not stop what I was doing. I remember taking a kitchen knife as I was in the kitchen and the defenceless child was on the floor.

“The voices instructed me to slit my child’s neck. My younger sister, who had gone to the well to fetch water, arrived and found me sitting in a pool of blood,” she said.

Siziba said after murdering her child, she never thought of running away or hiding the body as she thought her actions were justified. Instead, she was busy swatting flies that were all over the body of the child. Her younger sister screamed and alerted other villagers about the murder.

“My younger sister ran away screaming and that is how the villagers discovered that something was wrong.

“The issue was immediately reported to the police and after investigations were conducted, I was moved to Hwange, where my lawyers suggested that I be examined by two doctors. From the investigation by the two doctors it was discovered that I had depression and it was agreed that I be admitted to a mental institute,” she said.

Siziba said life at Mlondolozi Mental Institute was not easy for her as most people saw her as a baby killer, but with time they started having a totally different perception about her. This saw the inmate being offered medical counselling sessions to try and assist her quick mental recovery.

“I have been here for eight years and to be honest with you I can tell you that my first day here was not easy at all as most of the people thought I was a killer, but with time they got to understand me better.

“They gave me the medication that was recommended and at the same time I went through counselling sessions to help expedite my recovery and as we speak I am now part of the rehabilitation session at our station,” she said.

Siziba said in 2017 she got an opportunity to showcase her talents at Starbrite.

“I really enjoyed being part of the Starbrite competitions that were held here in Bulawayo in 2017. From these competitions I gained a lot in terms of experience and exposure as I managed to go as far as the finals.

“This competition really boosted my confidence in the arts industry and as we speak today I have managed to get a role in a film called Crime and Strings and I hope very soon the drama will be on your screens,” she said.

Siziba said on Crime and Strings she would be featuring as Cosmas’ wife, who is five months preg_nant. The couple is robbed at home and in the process she is accidentally shot dead by the robbers.

“The rehabilitation activities that I am exposed to are really helping me a lot in terms of reducing stress. This has assisted me in stabilising me from depression and I hope this is going to help me to fit well in the community once it’s recommended that I am now stable and ready to go back home.

“I sat for my Ordinary Level Mathematics examination in 2018 and I was able to get a C. I now have seven subjects at Ordinary Level. My aim now is to venture into Banking and Finance as a career,” she said.