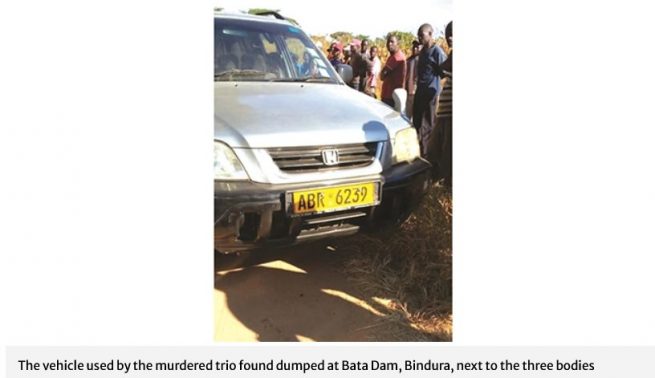 Misfortune has struck again in the Kashiri family with the wife of Medio Kashiri dying two days after her husband was strangled during a money-making ritual in the Bindura area.

Medio Kashiri is one of the three people recently found dead at Bata Farm in Bindura after first being allegedly poisoned by two traditional healers they had consulted to perform money-making rituals and then being strangled.

Petros Mwale and Antony Murombo Ndawana were the other two found dead.

Yesterday The Herald heard that the wife to Medio Kashiri died two days later with some in Rugare saying she died the night before her husband was buried.

Other neighbours were not aware of the incidents at the Kashiri residence and only got to know the cause of the death of Kashiri through the media. Neighbours have heard that Mrs Kashiri was buried at Glen Forest to the north of Harare while her husband was buried at his rural home.

“We heard she complained of a heart ache. Akati ndabayiwa pamoyo and died that night before the burial of her husband. We also heard her body was taken back to Harare for burial at Glen Forest where their children had bought graves for the couple,” said one of the residents who refused to be named.

The Herald visited the Kashiri family in Rugare but could not get more details as the sister to Kashiri said the family spokesperson had travelled to the rural areas.

“I am sorry I cannot entertain your questions. We are still mourning. As you can see my mother is still mourning and cannot talk to you. Our elder brother is the family spokesperson and he is not around. He is using a UK number and he will get back to you when he comes back,” she said.

Traditional healer Isaac Biningu (37) was arrested and appeared in court facing charges of murder and escaping from lawful custody.

He appeared in court on a stretcher bed due to injuries sustained after jumping from a moving police vehicle in his alleged bid to flee.

Biningu was remanded in custody to May 27.