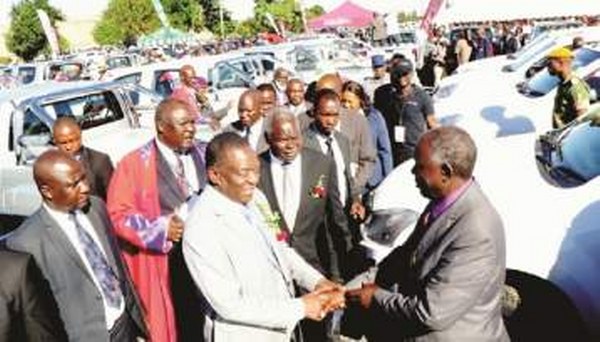 Another 18 vehicles were handed over to chiefs yesterday as part of the on-going programme to ensure that all chiefs were mobile.

Handing over the vehicles, President Mnangagwa said all people, regardless of their standing in society, should respect traditional leaders because of the role they play in communities as the custodians of the country’s cultural norms and values.

Traditional leaders had been the vanguard of upholding traditional values in the wake of cultural imperialism by the West.

“Every person has a rural home where they come from. All these Government Ministers have a rural home where there are traditional leaders. That is what we want, that we respect our traditional leaders. We had Westerners who would say Africans are united, they have their own culture, for us to have dominion over them let us strip them of their culture and impose our culture. That way we will have dominance over them.

“That is why we are commemorating Mbuya Nehanda. We have got our own cultures whose custodians are traditional leaders. Let us move together with traditional leaders, and we should preach the gospel of peace for the good of the country,” said President Mnangagwa.

Traditional leaders should unite their subjects since a united and peaceful country will ensure the attainment of the country’s objectives.

“We have 286 chiefs; each of them need to unite his people for the development of the country. All programmes we are carrying out as Government such as Pfumvudza, dam construction can only succeed when there is peace and unity,” said President Mnangagwa.

Turning to the vehicles, President Mnangagwa said the vehicles would go a long way in restoring the dignity of traditional leaders.

Chiefs Council deputy president Mtshane Khumalo paid tribute to the Government saying it will help them in discharging their duties. The chiefs who benefited yesterday are the fourth group in the on-going programme. Yesterday’s event was attended by several traditional leaders and senior Government officials.