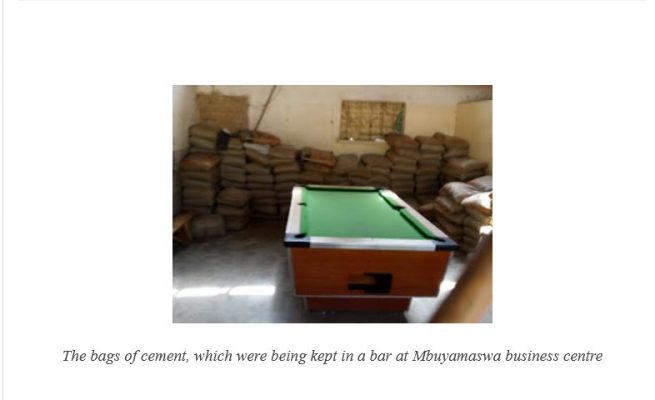 There is an outcry in Zaka Central after some 500 bags of cement meant for Mbuyamaswa Clinic dried up due to what many feel to be a case of negligence and poor management, TellZim can report.

The bags of cement, which were being kept in a bar at Mbuyamaswa business centre, were bought using money allocated under the Constituency Development Fund (CDF) disbursement programme in 2018.

Zaka Rural District Council (RDC) Ward 9 Councillor Moses Mutandavari confirmed the wastage saying the cement could not be used in time as there was no money to pay workers.

He said the Ministry of Health and Childcare promised to provide money to pay workers who would plaster the building but the promises did not materialise.

“The cement dried up since the workers stopped working because they had not been paid. As a community, we used to mobilise our own resources to pay the workers but it became more difficult with the Covid-19 outbreak and the resultant lockdown.

“We then had a meeting with the Ministry of Health representatives together with Assistant District Development Coordinator Mr. Zinanga and they promised us that the ministry was going to take over all the work,” said Mutandavari.

He said the builders could not continue as they had not been paid for the work that had already been done.

When contacted comment, Zaka District Health Services Department Administrator Eliah Zimbwa acknowledged that the ministry had promised to commit some resources but had not expected the community to stop its own resource mobilisation efforts.

“The ministry of health is supposed to fund the project but we did not stop them from finishing up what they had started because it was their project. The ministry came in to help the community and they should continue working until the treasury releases some funds,” said Zimbwa.

Assistant Zaka District Development Coordinator (DDC) Victor Zinanga said he could not speak to the media and referred questions to his boss Memory Dhliwayo who did not answer her phone.

However, Zaka District Medical Officer (DMO) Dr Mutero Mupereki said he was not sure about the actual number of bags that had dried up saying the community failed to handle the cement properly.

He said the community was wrongly blaming the Ministry of Health for the loss when the people themselves refused to lend the cement to Bailzone Mining Company which had promised to replace the cement later on.

“I was indeed informed about cement which dried up at Mbuyamaswa Clinic. People blame us but the contractors and the community failed to utilize the cement in time. The structure was ready for roofing but they could have prioritised plastering over roofing.

When contacted for comment, Zaka Central Member of Parliament (MP) Davison Svuure said he is not aware of any cement that dried up in his constituency.

“I have not heard of any cement that dried up, who told you about that,” said Svuure.

Svuure’s predecessor, Paradzai Chakona, who initiated the project when he was still MP, said it was painful that such critical resources had gone to waste.

“I initiated the construction of three clinics in Zaka Central and the other two are almost complete while this particular one is still a long way to go. I am very disappointed to hear that the cement was left to dry-up,”said Chakona.

Some community members said Svuure had told people to stop contributing towards the payment of workers, promising that he would source the money from government.

“Something similar happened at the Four Miles Clinic project where community contributions were paid back with promises that government would do the job. But there has never been progress ever since,” claimed one community member.

Zaka district is one of the most underdeveloped districts in the province where many people still travel more than 10km to the nearest health facilities and schools.

The district has seen a number of clinics being constructed in the past few years and most of them are near completion.

The Mbuyamaswa Clinic project, whose construction has been on hold since last year owing to the lockdown and none payment of wages, is now facing new challenges related to roofing material specifications needed for the release of new funding.

The project, which was initiated by the community, got funding from the government through the Ministry of Health and Child Care and the Ministry of Local Government, Public Works and National Housing.

Zaka District Medical Officer (DMO) Dr Mutero Mupepereki told TellZim that the Ministry of Health and Child Care could not provide new funding unless the Department of Public Works specified what was needed at every stage of construction.

“We do to work alone as a ministry. We work with government departments in other ministries, and in this case, we work with the Public Works department which knows what is needed. Our job is just to procure what would have been recommended by the department,” said Mupereki.

He said he was not sure as to when the work could resume at the project since the Department of Public Works had not provided the bill of quantities as yet.

“I am not sure when construction will continue. Right now, we are waiting for the list of materials so that we do the quotations,” Mupepereki said.

A source, however, said the Department of Public Works had no skilled manpower to draw the list of what was now needed.

“The clinic will not be completed any time soon because there are no carpenters and other artisans who can quantify the requirements and give the list to the Ministry of Health. Judging by the tiresome bureaucracy in government offices, the procurement will most likely take a lot more time,” said the source.