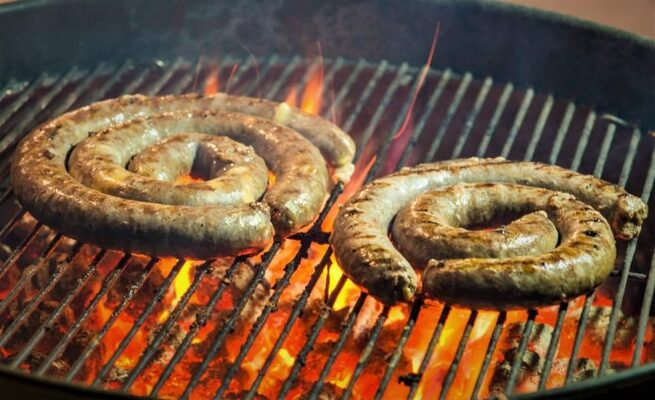 IT WAS a lovely Sunday and residents went all out as they prepared their seven colours.

Some even had a braai.

BUT THE SWEET SMELL OF DELICIOUS FOOD WAS SOON REPLACED BY BURNING SHACKS!

This after a resident forgot his wors on the stove when he went to fetch water.

Now 52 families from Roodekop squatter camp near Buhle Park in Ekurhuleni are homeless after their shacks were razed to the ground.

On Tuesday, 1 June, Daily Sun found the stranded residents trying to rebuild their shacks, but there was nothing to use.

Some shacks were built out of planks, chipboards and the fire ate everything. The zinc sheets were damaged by the intense heat and residents begged for any help they could get to rebuild their lives.

Gogo Florence Ndlovu (65) said the incident happened just after 8am.

“I was relaxing and looking forward to doing my washing when I saw smoke,” she said.

“I went outside and saw a big ball of fire. We all tried to extinguish it, but it spiralled out of control.

“We thought we could save our things, but the fire was strong. We watched in horror as things we worked hard for disappeared in seconds.”

Mkhulu Matthew Khoza (63) said the only things he had left were the clothes he was wearing. Residents said their situation was made worse by Ekurhuleni emergency services.

“Three of their fire engines came rushing, but none of them helped because they had no water.

“They watched as the fire ravaged our shacks. They shouldn’t have bothered coming,” said angry residents.

Residents appealed for building material as Ekurhuleni disaster management only gave them blankets and a few items of food.

Emergency services spokesman, William Ntladi, said it was not true that fire engines arrived without water.

“Seven fire engines from surrounding areas were deployed to help as the squatter camp doesn’t have a hydrant,” said Ntladi.

He said the first engines to arrive were from Wadeville.

“The problem we having is that victims don’t call on time. They try to extinguish the fire by themselves and when the fire spirals out of control, that’s when they call emergency services. We plead with people to call on time,” he said.