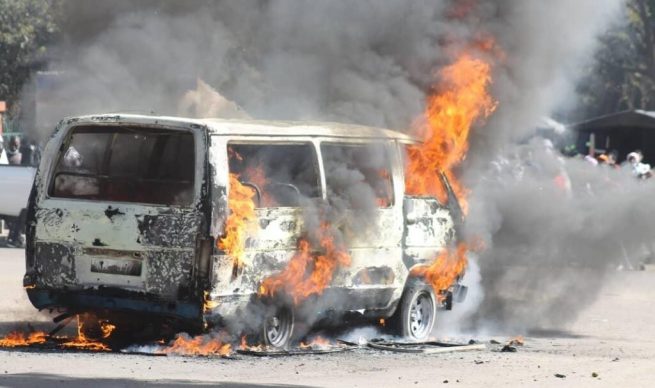 Metro traffic cops in Bulawayo were accused of shifting blame after allegedly burning down two kombis in the city center on Wednesday and then telling their boss in an internal memo that the commuter omnibuses had been set ablaze by “unruly elements” who even assaulted officers.

Multiple eyewitness accounts said the kombis caught fire and blistered to shells after police tossed tear gas canisters inside them following high-speed pursuit as officers tried to arrest the drivers on accusations of operating without ZUPCO licensing. Fire crews were deployed to no avail.

Government banned all kombis last year and ordered those wanting to operate to register with the state-owned bus company to create a monopoly that is being challenged in court.

“They threw in teargas, and when the vehicles started burning, the police fled,” one observer told ZimLive. “This should never be tolerated, not under any circumstances.”

Another accused the police of acting like a “gang of criminals.”

“The people who caused the pandemonium are suspected to be money changers, non-ZUPCO commuter omnibus drivers, vendors, and touts who are defying the government’s directive to observe Covid-19 rules and regulations. They want to vent their anger on the law enforcers,” the junior officer wrote.

The officers said trouble started when they tried to arrest the driver of an unregistered Toyota Hiace which was dropping off passengers “in the middle of the road along Herbert Chitepo, between 5th and 6th Avenue.”

But, said the memo, the driver took off and hit the front door of a police Ford Fiesta being driven by a Constable Hanyire, prompting a hot pursuit that ended with the suspect crashing into another vehicle before bailing on foot.

And when two officers, Constable Tlou and Constable Dube gave chase and apprehend the driver, a “mob surrounded and assaulted [them] with open hands, ordering them to release the accused person. The accused managed to free himself and ran away. However, his picture was captured.”

“Some were shaking it trying to overturn and at the same time threatening to burn it down. The police officers then locked themselves inside the police vehicle. The mob smashed the rear windscreen and rear right side passenger window with unknown objects.”

As the situation degenerated and became more precarious, police claimed, reinforcements were called in to disperse the restive crowd with teargas along Hebert Chitepo road, attracting what they said were “wayward commuter omnibus drivers” who “started skidding.”

The memo added: “After the crowds had dispersed, it was discovered that a white and black Toyota Hiace being driven by Julius Ncube of Magwegwe and owned by Lewis Tshuma caught fire at H. Chitepo Street and 5th Avenue.”

While the circumstances that led to the entanglement of the second kombi were not clearly explained, police said it was owned by Mackenzie Matshezi of Old Pumula, adding that it caught “fire along 4th Avenue, between H. Chitepo Street and Lobengula Street.”

The driver was identified as Tawanda Nyoni, 33.

“It is suspected that the unruly elements took advantage of the situation and set the two commuter omnibuses on fire and picked canisters and placed them in the burnt vehicles,” the police claimed boldly.

They said four officers had received medical treatment at Camp Hospital and discharged in stable condition, with their injuries varying from “a cut above the right eye” to “a right wrist dislocation and “a painful neck.”

Police said the suspects face charges of assault of law enforcement officers and malicious damage to property after one of their vehicles “sustained shattered rear windscreen, rear right side passenger window, and offside rear view mirror.”

Hearing the police account, one witness said dismissively, “It’s laughable, not in a funny way.”