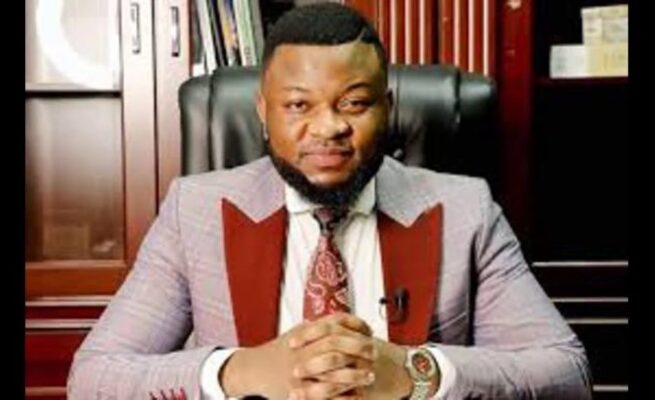 Self-confessed fake prophet Jay Israel has torn into the late TB Joshua questioning why he decided not to use his anointed oil, stickers, and water to heal himself.

Prophet Jay Israel took to Facebook alleging that TB Joshua had a chronic illness and he was on medication for the past two years.

MY COMMENT ON TB JOSHUA !!
•••
I remember last year we did an expose on this man, talking about his deceptions, lies and manipulations. Many people have flocked into Nigeria to buy anointed water, stickers and oils that he claimed can heal any sickness. Here is a very interesting analogy. For the past 2 years TB Joshua was on medication 0, popping pills because he had a chronic illness.

None of this was made public because it would demoralise the water and oil customers and shut down the business. If this man was a true man of God why didn’t he use his anointed water, oil and stickers to heal himself?

The problem with our naive and senseless African brothers and sisters is that no matter the signs they will forever be blinded by religion. Before he died he was a false prophet, a thief, liar and a charlatan and now that he’s gone nothing changes, he remains the biggest Charlatan to ever walk on earth. Whether he makes heaven or hell that is between him and God .
May his soul rest in peace !! 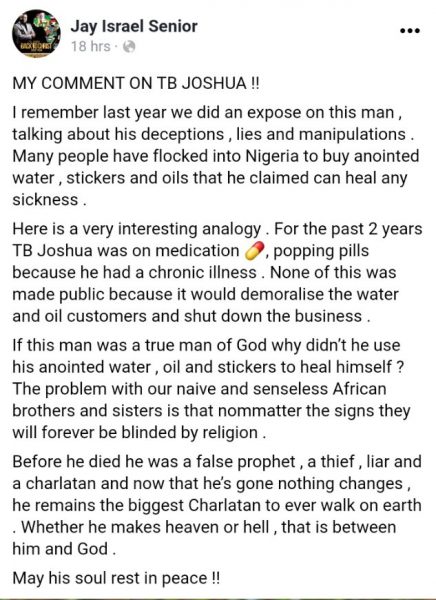 Prophet TB Joshua, founder of the Synagogue Church of All Nations (SCOAN) died last weekend after conducting a church service.

According to some sources, the man of cloth passed away around 2am, hours after he walked to his apartment from a church service to get some rest.

Last year, Jay Israel came out clean exposing how he used satanic dead pigeons, red towels and a horn to gain power, wealth and popularity while running a cult at his church, Times Live reported.

Israel, who was born in Zimbabwe, gave an account of how, when he joined a cult in Benin, he believed he was able to prophesy and make people do what he wanted them to do.

He told the Commission for the Promotion and Protection of the Rights of Cultural, Religious and Linguistic Communities (CRL Rights Commission) on Monday that he started a church in Harare at the age of 18.

Opening a church in SA, according to Israel is easy.

“It’s not much of a hustle. We started a gathering and when people gathered, it was a church before it was even registered.”

While still in Zimbabwe, Israel met a man from Ghana through Facebook who promised to help him grow his church.

“We started talking. He said he would take me to places and help me get bigger crowds.

“I asked him how? He said he could even help with prophesying. I was intrigued. I was excited. I invited him to Zimbabwe,” Israel said.

He left for Ghana with the man and they then went to Benin where he was introduced to an elderly man.

“We took a long drive to this village. As we were getting to the village, we saw so many kids. I asked why there were so many kids?”

He said the man told him that the children were kidnapped and brought to the country as sacrifices.

“The kids are used for black sacrifice. Their blood was used to sacrifice. It scared me a bit…”

He said he was told a ritual for protection would be done before he could get what he wanted.

“We slept in a room. It was scary. There were sculptures smeared with blood.

“Many people across the world do not know what prophets do before they can lead people. I am not saying the power of God is not there, but we have messengers who are sent straight from hell to represent heaven. People are manipulated into believing that what they are told comes from God, yet it is not close from being from God.

“The man came with a razor. He used a black substance and rubbed it onto the cuts on my body.

“I was washed with water mixed with leaves. They took pigeons and cut them and smeared their blood all over me and they said this is now the process of initiation.”

He was told the name of the god was Atiovi.

“The following day we went to another room where this god was. There was a lot of blood all over [the room]. It sounds like an African movie. It’s so unreal but it is what it is.”

He said he was told to kneel and bow down before the god. He was also told what to say to the god.

“They said, ‘OK, the initiation is done, we are going to give you a horn.’ It was a bighorn and I kept it in my bag.”

The horn had a “head” inside which was a substance.

Israel said the horn was covered with a red cloth. He was told to use it before his church services.

“They said when you go back to your country, you must make a sacrifice to the god [the horn] before you go into a church service. They said you kill a pigeon or chicken and take its blood and smear it on the horn. I was told to take gin and spit it on the head of the horn and say the words and lick it [blood] with your tongue.”

This was an “entry-level” sacrifice, he said.

“I believe if I was persistent I was going to do human sacrifice because it’s like a drug. It’s addictive…”

He said he was not forced to join a cult but that he joined so he could have the power to be able to call out people’s names and do things he could not do on his own.

According to Israel, “mega” churches use human sacrifices to remain wealthy and powerful.

While involved in the cult, Israel said he was introduced to a demonic bible and other books on how to manipulate and deceive people to get whatever he wanted.

He would conduct “Do as I say services” when he started a church in East London.

He would use a red towel to get people to give him whatever he wanted.

“I would put the towel over a person’s head and they would fall down.”

He used certain words to control crowds at church which his followers thought was him speaking in tongues. He would use bible scriptures to make people give money to the church. He would deceive his followers into believing that if they did not pay tithes, they were robbing God.

“The growth of the church did not mean people were growing spiritually. It was all about what I am getting at the end of this. After leaving everything with you, they [congregants] will find it important to come back to you and thank you for wiping them clean.”

He said he was living a high-end life with several cars and bodyguards.

People gave their most prized possessions to him.

“I would appear in people’s dreams and tell them what I want from them. They would come and say, ‘I saw prophet in my dreams telling me to give him my car.’

“If I want to bring fear to somebody, I would appear in their dreams and scare them. They would come and confess that they were questioning me.”

According to Israel, many people have been enslaved spiritually.

Israel said his occult life exhausted him to a point where he resorted to women, alcohol and drugs.

“I loved the rough life. I did not like church women.”

He said he left the cult because he got tired of slaughtering chickens as a sacrifice.

“I got tired of sacrificing chickens. I bought a lot of chickens to a point where people would ask me why I was buying too many chickens.”

When he wanted to get out of the cult, Israel said he started having bad dreams and he could not sleep at night.

“I could not sleep because of the dreams that were haunting me spiritually.”

He said he was told that if he did not renew the muthi he would be killed.

Israel claims to have apologised to the people he deceived and says he has returned all the possessions he received while running the cult.

GOOD JOB: Police arrest 7 gunmen including a 16-year-old boy who were terrorising residents...

News Muza Mpofu - 6 July 2021 0
Police in Beitbridge have arrested a gang of seven armed robbers that were in the habit of pouncing on local residents, taxi drivers and...

News Muza Mpofu - 6 July 2021 0
The Reserve Bank of Zimbabwe has announced the introduction of $50 notes that will come into circulation with effect from tomorrow the 7th of...

JUST IN: Horror scenes as lodger kills landlord after he ordered him to vacate...

News Cynthia Goba - 6 July 2021 0
A 22-year-old Kwekwe property owner was stabbed to death by his tenant following an altercation over rent. Police confirmed the death of Prayer Banda of...

SAD: Man bitten by snake ‘in geni_tal area’ while relieving himself in toilet

News Muza Mpofu - 6 July 2021 0
A 65-YEAR-OLD madala was injured after a python bit him while he was sitting inside the toilet at home. He reportedly felt a touch on...
Loading...