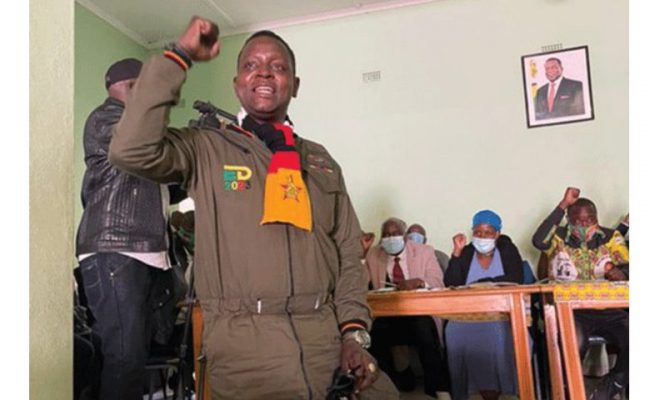 Sulumani Chimbetu has apparently always been a political animal, and is often seen in the company of prominent activists. His latest gambit, however, could prove disastrous.

Pictures of the dendera music principal clad in Zanu PF regalia have been awash on social media, attracting strong reaction from the antiestablishment brigade.

Sulu’s images that went viral were a cause for celebration in Zanu PF circles only days after his pictures with MDC Alliance Member of Parliament for Harare West Joana Mamombe attracted a backlash from the same party now claiming him as their own.

Sulu, son of the late legendary musician and liberation war hero, Simon, has been under a barrage of criticism from mainly Zanu PF supporters who took him to task over his association with Mamombe and of late, Zimbabwe National Students Union (Zinasu) president Takudzwa Ngadziore.

He was a subject of political debate after he was captured on camera welcoming Ngadziore from remand prison and has been on record expressing solidarity with the student leader.

This upset some Zanu PF who wanted him to be stripped off his ambassadorial role at the Zimbabwe Prisons and Correctional Services.

Sulu was conferred with the rank of Assistant Commissioner by the late former (ZPCS) Commissioner-General (retired) Major-General Paradzai Zimondi at the Harare Central Prison.

The Alice Mbewe hitmaker visited the Zanu PF’s merchandise shop, House of Cheneso, where he took time to pose for pictures in party regalia.

The singer is lending his popularity to the ruling party and he is said to be a member of the Zanu PF youth league from zone 1 in Harare and was pictured “chanting” Zanu PF slogan at what appeared to have been a party meeting.

This however, evokes the early 2000s memories for artistes such as the late Andy Brown and Simon Chimbetu who found themselves shunned by the masses and had their careers confined to the dustbins after they openly aligned themselves with the ruling party.

They both died trying to revive their careers.

For reference, the late music icon Oliver “Tuku” Mtukudzi who managed to refrain from partisan politics, died a much loved figure.

News Muza Mpofu - 29 July 2021 0
TWO hot-blooded Malawian soldiers were sent to a peace-making mission in the Democratic Republic of Congo. Instead of finishing their mission, they were sent packing...
Loading...