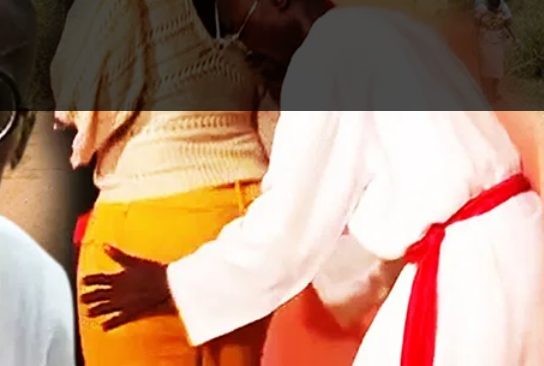 A cleansing ceremony turned horribly wrong when a prophet was given a thorough beating by the husband of a woman whom he was allegedly caressing, claiming he was trying to get rid of evil spirits tormenting her.

The incident which is still the talk of Inyathi Business Centre in Matabeleland North province happened a fortnight ago.

It is reported that Lenox Mathe became upset with the way Clayton Mutasa, popularly known as Madzibaba Munana, was delivering his wife Marymore Ndlovu from an undisclosed ailment.

Madzibaba Munana is famed for his healing powers.

Madzibaba Munana is no stranger to controversy as sometime in 2019, he courted the wrath of some of his congregants after one of the female congregants claimed that he persuaded her to play with his manhood after she had approached him seeking spiritual healing.

According to a source who spoke to B-Metro, Mathe, who was following proceedings of his wife’s cleansing from a distance, became angry and went straight to Madzibaba Munana’s shrine and beat him up.

This was after he noticed that he was inappropriately touching her brea_sts and private parts.

While beating Madzibaba Munana, Mathe was reportedly heard shouting that it was unacceptable for the prophet to touch his wife’s private parts just for prayers.

“Angered by the strange way Madzibaba Munana was carelessly touching his wife in full view of people who were also waiting to be assisted by him, Mathe dashed to the shrine and savagely assaulted Madzibaba Munana with fists and kicked him all over the body. The prophet was later rescued by members of his congregation who rushed and held Mathe,” said the source who declined to be named.

When reached for comment Mathe furiously said: “That’s nonsense. Is he (Madzibaba Munana) the one who came to you and reported the matter? I will also deal with you once the matter is published in the Press.”

Madzibaba Munana, however, defended himself saying he was being led by the Holy Spirit to do what he did to Mathe’s wife in order to get rid of the evil spirits possessing her.

He further said he had since filed a charge of assault against Mathe at Inyathi Police Station, but investigations by B-Metro revealed that a report of such nature was never recorded at the police station in question.