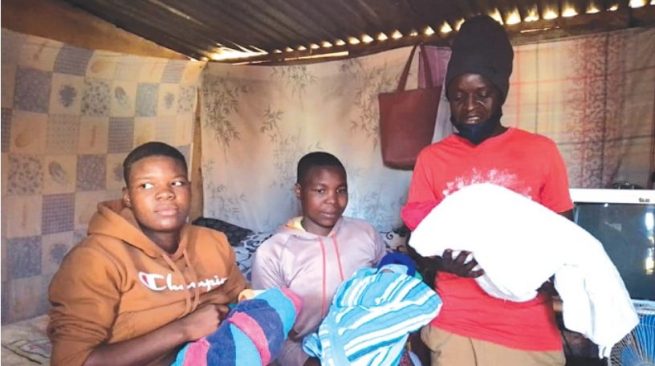 A 16-year-old girl has given birth to triplets in what the community has embraced as a blessing from God, but the couple is struggling to take care of the babies since the husband, 18-year-old Leonard Maenza, is not formally employed.

When The Herald visited the young family, Ruvarashe balanced two babies on her lap, one on each arm as she breastfed them while her aunt held the other child.

Considering her age, having triplets is not an easy task the teenager has to cope with.

She had no idea that hers was a multiple preg_nancy, neither did she have a scan or pre-natal care and check-ups.

She said it was a shock discovering that she was having not one or two, but three babies while lying on the delivery bed.

The teen mother gave birth naturally to triplets at Bindura Hospital on May 3 and together with her husband, Leonard, they are overjoyed.

But the two have no financial means to look after the family adequately and they are relying on well-wishers.

Ruvarashe fell preg_nant last year after dropping out of Form 3 due to challenges with school fees.

She dropped out during the Covid-19 lockdown.

“Following the separation of my parents I started staying with my grandmother in the Maganyani area in Bindura rural. I commuted to Bindura every day for secondary education and due to resource constraints I dropped out of school while in Form 3 last year,” she said.

“I met Leonard and I eloped in August. I fell preg_nant and he was assisted by his relatives to pay lobola. His father passed away and his mother welcomed me.

“I had no idea that I was carrying triples and the babies came one after the other, it was a surprise. I thought I was carrying one baby, I could not believe it when the nurse said another baby was coming and then there was another one.”

Ruvarashe said they did not have marital problems and were happy in the home.

Leonard survives on piece jobs and the challenge, according to the wife, is taking care of the babies.

“I am not producing enough milk for the babies,” she said.

Ruvarashe’s aunt Miss Anna Chisoni, who is staying with the teen mother, said the biggest challenge was on milk, soap and clothes for the babies.

“The father is not employed and cannot take care of these babies. He is trying to fend for his family, but the situation is too big for him,” she said.

“I am currently staying with the babies and the mother because this place is close to the hospital. The babies are frequently going for check-ups and they are on kangaroo mother care due to low weight.

“I know that these children are still young but we accepted the situation and we thank God for the blessing of the babies. When she eloped I tried to take her back, but they insisted that they love each other and wanted to stay together.

“They don’t have problems in their marriage and our in-laws are supportive. I hope that the father is assisted in getting a job.”

The father, who has no cell phone, was said to be wandering around looking for piece jobs to buy milk for the babies and food for the wife.

However, his mother Ms Beauty Maenza said Leonard is her only son and she is happy to have three grandsons, Takunda, Tinotenda and Tawanda.

“I am happy but the challenge is lack of adequate food for the babies. My son is not employed but with his wife they don’t have marital problems. I am staying with them at a farm compound at Saimona Village 3B,” she said.

Ward 6, Councillor Oliver Mukombwe said he will facilitate the employment of Leonard at Bindura Municipality when vacancies arise.

“Currently a number of employees had their contracts terminated but I am sure the council will recruit any time soon. This is not easy, other families are struggling with one baby. We are happy for the young couple, it’s a blessing to have triplets. I urge the community to assist in any way they can. Let’s support this young family,” he said.

Women Coalition of Zimbabwe (WCoZ) provincial chairperson Ms Mandi Piyasi who mobilised milk, clothes and soap for the babies, said the rate at which teen pregnancies have risen in Mashonaland Central province was alarming.

“Teen preg_nancies are a deterrence to achieving gender equality. It is high time families embrace se_x education to ensure our girls are well-informed of the ills of engaging in se_x and unprotected se_x early,” she said.