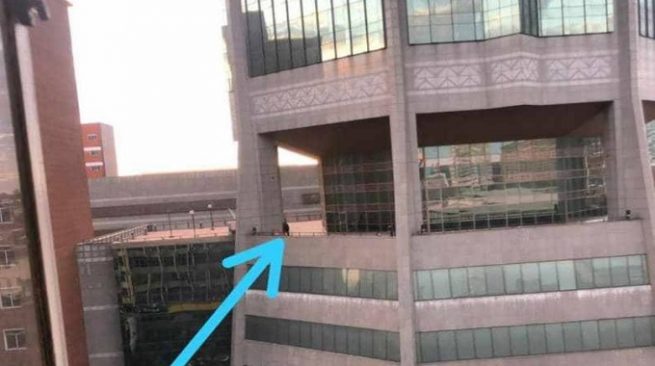 The Reserve Bank of Zimbabwe (RBZ) has expressed displeasure after pictures of two of its supposed employees cano0dling and hugging on the mezzanine floor of the central bank’s building in Harare went viral saying the people in question are not their workers.

A Twitter user yesterday evening posted two pictures of the building which showed a man with a face mask and a woman in a red skirt in an embrace on the mezzanine floor.

“If Wifey left in a Red Skirt and works at RBZ she is cheating on you with someone from work. #FixTheNation,” posted the user with the handle @chelsease_xual.

However, the RBZ Governor Dr John Mangudya, in a statement, has said the couple was caught on CCTV and it has been established that they were not workers of the central bank.

The Governor also revealed that the couple was at their supposed love nest from 5.08PM to 5.35PM and left the building in different times after at 7PM.

“The Bank wishes to express its displeasure at the images circulating on social media of a man and woman hugging each other on the smoking zone mezzanine floor of the Bank Building. The Bank’s high-definition CCTV footage shows that the incident took place between 1708hrs and 1735hrs on 21 June 2021 and that the two people left the Bank Building at different times after 1900hrs.