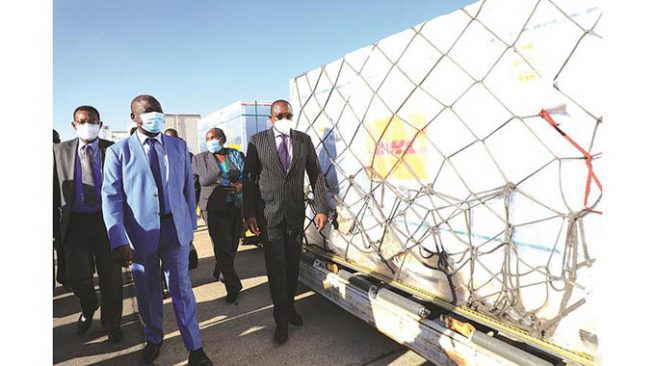 Zimbabwe yesterday took delivery of two million Sinovac Covid-19 vaccines bought from China, with another 3,5 million expected this month as Government intensifies the vaccination programme, part of efforts to bring life in the country back to normalcy.

The Government is keen to quickly achieve herd immunity and revive the economy which has been affected by the global pandemic.

Senior State officials yesterday said the vaccination programme was not just about saving lives but saving the economy and the world at large.

After receiving the largest single consignment yesterday, which takes the doses in the country to more than four million, Prof Ncube said another 1,5 million would be coming next week while another two million were expected at the end of this month.

“We can now go full throttle in terms of the vaccination programme that is being rolled-out by the Government through the Ministry of Health and Child Care.

“When people are vaccinated it is easier for the Government to open up all aspects of the economy, so it is also about economic recovery,” said Minister Ncube.

Zimbabwe is accelerating its vaccination programme which had so far received international acclaim.

Government availed US$100 million for the purchase of the vaccines and Minister Ncube said there was still around US$60 million in the coffers and more doses are on the way.

“You have seen some of the global numbers, global GDP growth being projected to grow at six percent next year, and one of the big drivers is the vaccination programme right across Europe, right across the globe and Zimbabwe will even do better by growing more than the global economy at more than seven percent in 2021 and just above five percent in 2022.

“So it is about the economy, it is about saving lives, please get vaccinated, it is the way to go,” said Minister Ncube.

Dr Mangwiro said the inoculation campaign has reached top gear and encouraged people to continue taking up the vaccines which is a proven scientific record at beating the pandemic.

He reminded those who have been vaccinated to continue adhering to the prescribed containment measures and break the infection curve.

“I have been moving around. The past week, I was in Mash West and the uptake is massive. Colleges and universities will also be points of vaccination,” he said.

Deputy Minister Mangwiro said being vaccinated did not preclude those with comorbidities to continue taking their treatment for other conditions like HIV, blood pressure, diabetes among other ailments.

He also reminded private players willing to participate in the vaccination exercise, of the requirements by the Government.

“Vaccines are a scientific programme run by scientists. All vaccines are imported by the Government and these vaccines must be first registered in the country and approved.

“If you are a private player wanting to import vaccines, go through the Ministry of Finance, make your payment, get your vaccine, but it must be a registered vaccine in our country and cleared by our organisations like any other medicines in Zimbabwe to ensure that they are safe for consumption.

Zimbabwe is vaccinating its population mainly using the Chinese-made Sinopharm and Sinovac vaccines which were granted Emergency Use Authorisation by the World Health Organisation (WHO).

Research conducted by the Gamaleya National Research Centre of Epidemiology and Microbiology and the Russian Direct Investment Fund (RDIF) revealed that another vaccine approved by the Government, Sputnik V, showed a 97,6 percent efficacy.