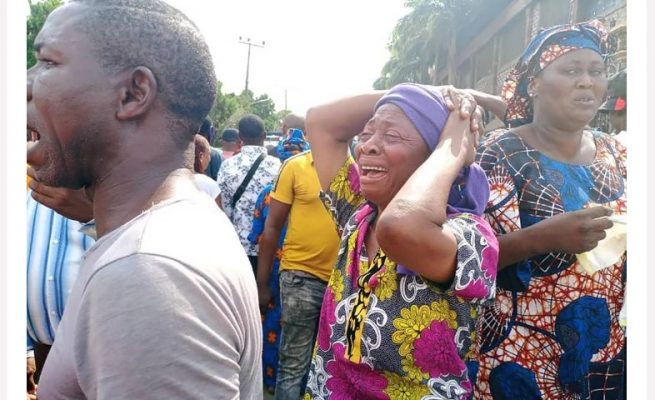 Mourners have allegedly vomited blood and other poisonous substances at the week-long funeral service of Nigerian pastor and televangelist TB Joshua as he lies in state at his church, The Synagogue, Church of all Nations (SCOAN) in Lagos.

Hundreds of mourners filled the SCOAN on Thursday, for day four of the week-long funeral, to pay their final respects to the controversial pastor who died on June 5 shortly after a live broadcast.

According to reports out of Lagos, Joshua’s body was escorted by a motorcade of motorcycles during the procession to The SCOAN, in Ikotun-Egbe, Lagos.

Earlier, there was a procession conveying the body of Joshua from The SCOAN Prayer Mountain to the church auditorium.

The Ondo State Government House Choir performed at the lying-in-state programme, while mourners from around the world gathered, including a delegation from Israel.

Joshua will be laid to rest on Friday and this segment of the funeral procession will also be open to the public, although with limited seating in line with Covid-19 regulations.

The week-long procession will culminate in a thanksgiving service on Sunday, which will also be physically open to only a limited number of people.