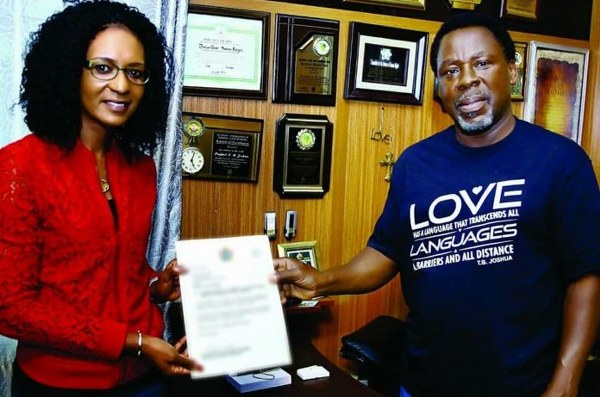 TB Joshua, the late founder of the Synagogue Church of All Nations (SCOAN), body viewing event was held on Thursday, July 8.

TB Joshua died on Saturday, June 5, during a live broadcast from the church auditorium in Lagos’ Ikotun neighbourhood.

On Friday, July 9, after the SCOAN leadership’s ceremony, Joshua’s remains will be interred on the church grounds.

Tears flowed uncontrollably as the remains of the late founder of the Synagogue Church of All Nations (SCOAN) arrived at the church premises on Thursday, July 8 ahead of his final burial on Friday, July 9.

A photojournalist who was present at the occasion provided a visual representation of the event.

The Funeral Of TB Joshua

Meanwhile, the SCOAN leadership announced that pastor TB Joshua would be laid to rest on the church grounds on July 9, 2021.

According to a statement released on the TB Joshua Ministries Facebook page on Tuesday, June 29, the church indicated that the renowned cleric’s burial activities would take place from July 5 to July 11.

A series of activities dubbed “Celebrating the life and legacy of Prophet TB Joshua (1963-2021) – Not mine, but God’s own” would be carried live on Emmanuel TV, according to the statement.

A candlelight procession will be held on Monday, July 5 at 6 p.m., with people asked to get a candle as a symbol and connect with the program in their homes to honour God’s servant, according to the statement.

TB Joshua’s Successor Will Be Chosen By The Holy Spirit

Following the report that Evelyn, the wife of Pastor TB Joshua, had been appointed to replace her late husband as the general overseer, the church finally set the record straight in a related report.

Prophet Temitope Balogun Joshua, also known as TB Joshua, was the religion’s late founder, and his successor is yet to be picked, according to the church.

On behalf of the church, Gary Tonge stated that an announcement on who will fill the shoes of TB Joshua would be made in due time.

He stated that identifying his successor would not be an administrative matter, but rather a decision that would be made through the leadership of the Holy spirit.

Temitope was one of Nigeria’s wealthiest persons, having gained his fortune as a controversial Christian clergyman, televangelist, and faith healer while also being a philanthropist.

According to website Glusea, which ranks the net worth of celebrities, among others, the Synagogue Church of All Nations founder’s net worth was valued at US$150 million.

Glusea wrote that Joshua owned a private jet worth US$60 million and a fleet of luxury cars.

According to Nigerian news website Otakukart, TB Joshua was named one of Africa’s 50 most influential people by pan-African magazines The Africa Report and New African Magazine.

The news site also reported that apart from these accolades, Forbes stated that Joshua was the third richest pastor in Nigeria in 2011. The church, however, denied any such claims.

He is best known as the founder and leader of the Synagogue Church of All Nations (SCOAN), a congregation that he founded in 1987 and today serves over 15,000 people on Sundays.

His divine abilities to treat all kinds of incurable diseases like HIV/AIDS, cancer, and paralysis sparked a fierce debate.

TB Joshua and his SCOAN had sparked controversy both in Nigeria and overseas as the perfect seduction for miracle-seeking worshipers.

Ghana, the United Kingdom, South Africa, and Greece are among the countries where the church has established branches.

In addition, through his Another Ministry, he continued to provide aid and assistance to the disadvantaged on a national and international basis.