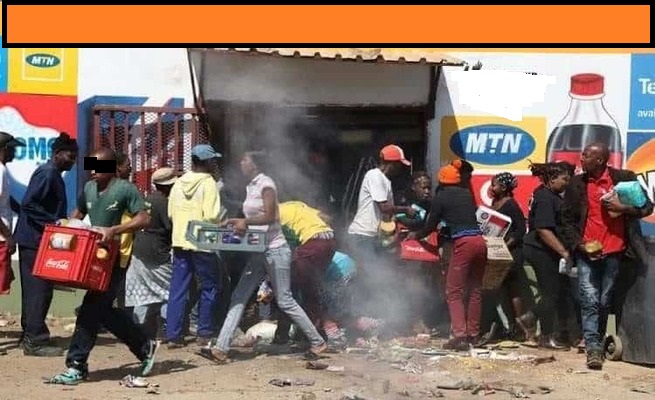 IT seems like angry residents are doing wrong things to voice out their anger.

They want the former president Jacob Zuma to be released from prison.

They are no longer just blocking the roads, but they are also looting shops.

All the shops were closed in KwaMashu centre after residents broke into Shoprite store on Saturday, 10 July 2021 and looted.

This resulted into all shops in this centre closing earlier than the normal time today.

Residents helped themselves in food, all kinds of electrical appliances, two plate stoves and whatever they needed.

One of the workers who wished not to be named blamed the cops.

“We heard the day before that people were threatening to break into the shops as they did in the nearby shop Boxer,” said worker.

She said when the residents stormed into the store, they ran to the back door and fled for their lives.

A resident (30) who asked not to be named said they have been sitting since the morning waiting for the opportunity because they heard early that they will break in.

Another resident said he has gone to a nearby shop and when he heard about the looting, he also joined in.

“I took a two-plate stove because my one at home is broken. I then escaped. I heard that most people were from the nearby area called Solezwe. They took things, went to their home and returned for more,” said the resident.

Another resident said more shops will be looted as the former president Jacob Zuma is still not released from jail.

“We want Zuma out or else more bad things will happen. We are not afraid of the cops anymore. We are angry and want to see Zuma out from jail,” said the resident.

However, even after-hours cops were still parked in the centre monitoring the situation.

Some cops were seen driving around the centre still monitoring the situation.