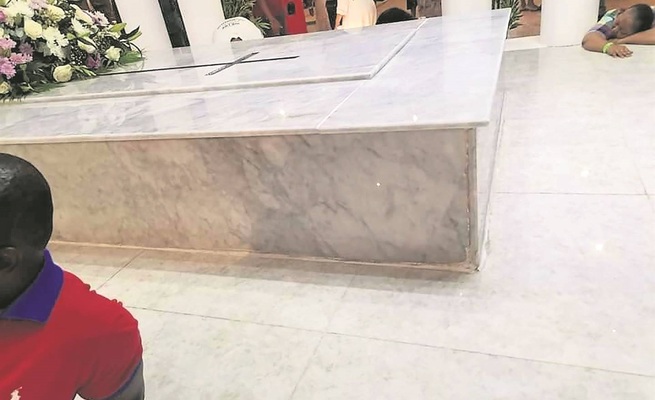 But the question everyone is asking is whether the prophet is expected to perform miracles from the grave.

This comes after his followers reportedly flocked to his church, Synagogue Church of All Nations, where he was buried.

Many followers were seen praying and touching the grave in Lagos, Nigeria.

Diangha Chongsi wrote on Facebook that TB Joshua’s grave became a shrine where people could pray to receive revelations and miracles.

“It’s not news or new to see TB Joshua wasn’t just buried inside the church, but that his grave is now being worshipped and people go there to pray.

“The grave has become a shrine and an idol to be worshipped.”

After TB Joshua’s death more than a month ago, News Agency of Nigeria reported that residents turned their houses into cottages manufacturing outfits.

The news agency said many produced various TB Joshua branded souvenirs to make a living from the man who fed them while he was alive.

While many people were still shocked by his glamourous funeral, others were shocked he was buried in the church.

@Mlungisi_N22 said: “In Nigerian culture, sometimes a mother or father can be buried inside their house.

“You dig up the lounge or bedroom, bury them and put the cement floor back on. Hence TB Joshua was buried in his church.”

@MuntuKazumane said: “I have attended a Nigerian funeral via Zoom. We were told not to be surprised as the man was the head, he will be buried in his bedroom.”

@Veteran_Kola said: “Bishops of the Catholic church are buried inside the church. It’s not new stuff.”

But some felt people have turned the prophet into an idol, which went against their beliefs.

@HisMajesty83 said: “The church will indirectly take the direction of ancestral worship.”