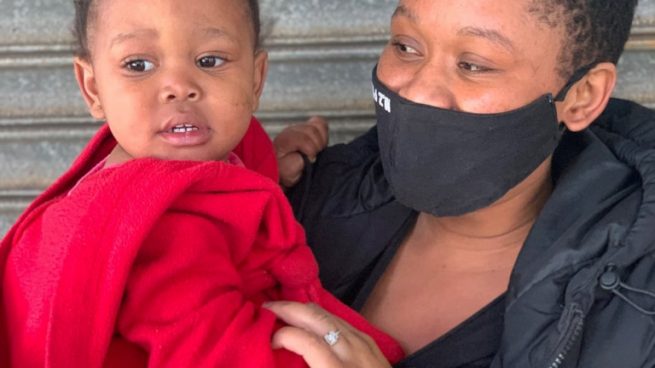 A mother who threw her baby to a crowd from a smoke-filled building in the South African coastal city of Durban has told the BBC of her gratitude to those who saved her daughter, who turns two next month.

“All I could do was trust complete strangers,” Naledi Manyoni said. She added that they were both doing well.

The building they were in was set on fire by looters.

The unrest was sparked by the jailing of former President Jacob Zuma.

The 79-year-old was convicted of contempt of court last month after failing to attend an inquiry into corruption during his presidency.

He handed himself in to police last Wednesday to start serving his 15-month prison sentence, but this sparked violent protests, arson attacks, and opportunistic looting in his home province of KwaZulu-Natal and spread to other cities and towns.

At least 72 people have died in what President Cyril Ramaphosa has described as some of the worst violence South Africa has witnessed since the 1990s, before the end of white-minority rule.

The government says it will deploy some 25,000 soldiers to stem the violence.
How was baby Melokuhle rescued?

BBC cameraman Thuthuka Zondi filmed Ms Manyoni throwing Melokuhle, when they were on a street in Durban’s city centre on Tuesday afternoon after it had been hit by looters.

Those raiding ground-floor shops had started a fire in the building in which Ms Manyoni had been visiting her partner.

They were staying in the 16th floor of the apartment block when they noticed smoke rising.

The lift was not working because of the fire, so Ms Manyoni frantically ran down the stairs with her baby.
However, she was unable to get to the ground floor as the area was blocked.

She says she managed to squeeze through to a balcony area on the second floor where she appealed to passers-by for help.

“All I could think was to make sure my baby lived,” she said.

Firefighters arrived at the scene about 20 minutes after people in the crowd had started rescuing others residents with ladders – which is when Ms Manyoni was reunited with her daughter.

She told the BBC they managed to return to the flat at about midnight.

Days of unrest have sparked shortages of bread and fuel in Durban, where long queues have formed outside shops and petrol stations.

On Tuesday South Africa’s biggest oil refinery announced that it was suspending its operations, blaming civil unrest in the country and disruption of supply routes in and out of KwaZulu-Natal.

Meanwhile, the executive director of the South Africa’s largest farmers’ organisation, AgriSA, said producers were struggling to get their crops to market because of the logistical “shambles”.

“We need the restoration of law and order as soon as possible, because we are going to have a massive humanitarian crisis,” Christo van der Rheede told AFP news agency.

In his first public comments on the violence, Zulu King Misuzulu kaZwelithini condemned the looting, saying it was painting a bad picture of the community, and that the destruction only harmed the poor.

“I never imagined that my father’s people would be involved in the burning of their own country,” he said.

“Knowing that all this is happening in a time of pandemic, and at the height of the most dangerous variant of the virus, leads to the only conclusion possible: my father’s people are committing suicide,” said King Misuzulu, who was named earlier this year following the death of his parents.