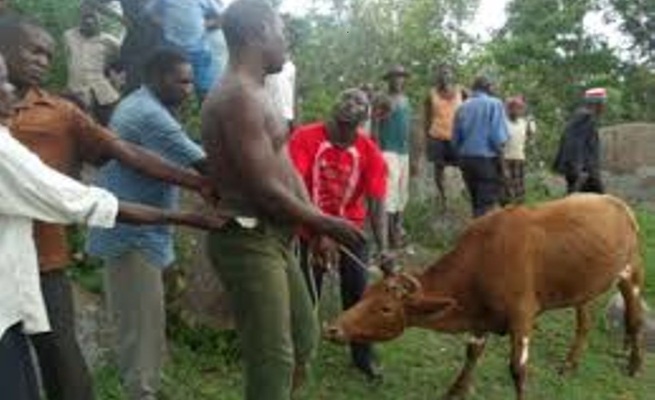 The 24-year-old was caught red handed being intimate with his neighbour’s cow.

When John Muchiriwesi appeared before Mutare magistrate, Mr Langton Mukwengi, he was being charged with bestiality charges as defined in Section 74 of the Criminal law (Codification and Reform) Act, Chapter 9:23.

Muchiriwesi, who has already been convicted by Mr Mukwengi, pleaded guilty to the charges.

The court heard that the owner of the cow, Simbarashe Nkomo, left his four cattle in a paddock.

To steady the cow, Muchiriwesi tied its two rear legs and became intimate with it in broad daylight.

Upon his return, Nkomo got the shock of his life when he caught Muchiriwesi in the act.

When he saw Nkomo approaching, Muchiriwesi quickly picked up his clothes and ran away.

A police report was made, thereby leading to his arrest.

His sentence will be delivered today (Friday).

However, the offense is considered a taboo in the Zimunya area and if convicted by Chief Zimunya, Muchiriwesi might be ordered to pay for a cleansing ceremony and buying another cow for Nkomo.

In an interview with The Weekender, Nkomo said he wanted his cow replaced since it has been defiled.

“It is a taboo and we are currently waiting for the matter to be heard before Chief Zimunya. We have no dates yet due to the lockdown but he will appear before the Chief because I personally went there and reported the case.

“I saw him doing that to my cow with my own eyes.

“He should come and collect his wife (the cow) and replace it with an undefiled one. The chief should fine him so that he learns his lesson. This should not just be a criminal matter as it is a traditional matter too,” fumed Nkomo.

Speaking to The Weekender on the matter, Chief Zimunya confirmed that it had already been brought to his court.

“Both parties will soon appear here. What that man did is a taboo, makunakuna chaiwo, and it is also criminal. The area needs to be cleansed and we can only do that using a sheep which he will bring himself,” said the traditional leader.

Chief Zimunya said Muchiriwesi will have to replace Nkomo’s cow because the moment he became intimate with it, it became unclean.

“From there, Nkomo will do whatever he wants with the unclean beast, he can either sell it or kill it but he will still have the replacement,” said the chief.

Hubby wants to bring his girlfriend to our matrimonial home we built together: Woman...

Sports Muza Mpofu - 16 August 2022 0
WARRIORS midfielder Marvelous Nakamba could be shipped out at English Premier League side Aston Villa where he has fallen down the pecking order. According to...