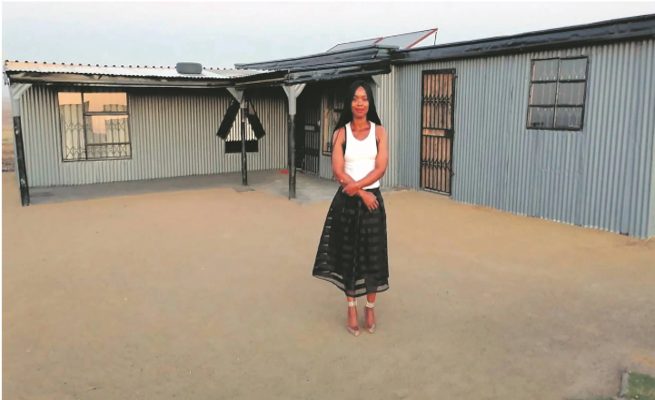 And people laughed at her for a long time. But this did not kill her spirit.

Instead, it encouraged her to build a bigger shack.

Today, Ningi lives in a big and beautiful shack and some people are jealous of her.

She found two dead chickens buried in her yard on Wednesday, 25 August and believes people are jealous of her beautiful shack.

“I was shocked when I found the chickens. I called a prophet and he said I shouldn’t touch them until he arrived.

“He poured holy water on the chickens and they turned green. He then took them and burnt them at the veld,” she said.

Ningi told Daily Sun she wanted those who buried the chickens in her yard to know she is not shaken.

“This is motivating me to do even more. I am not done with my shack.

“I want to improve the interior. When someone enters, they must feel like they are in a hotel,” she said.

Her shack has a kitchen, dining room, bathroom and two bedrooms.

It also has a solar panel, DStv and a veranda. The single mum of one said she did not have a fancy job but was just brave.

“If I want something, I work hard until I get it. It didn’t sit well with me when people laughed at my situation.

“I told myself I will push and I did just that,” she said.

She encouraged people to never quit, but work hard until they get what they want.

The prophet who helped Ningi said after pouring the chickens with holy water, he was not afraid to touch them as the muthi was not meant for him.

“I will pray with Ningi. God will give her strength,” he said.

Ningi’s neighbour, Joyce Ngakwe, said they were shocked when they saw the buried chickens.

“Whoever planted them obviously meant no good. Ningi should find a powerful sangoma to strengthen her home,” she said.

Sangoma Jabulani Mthimunye said evil people will do anything to see others fail.