ZANU PF has reiterated its commitment to work with Zambia’s ruling party, the United Party for National Development (UNPD), to help foster close cooperation on matters of mutual interest.

Since UPND took over power in Zambia last month, there have been attempts by some quarters to drive a wedge between the two parties.

“From the outset, His Excellency, President Emmerson Dambudzo Mnangagwa, gave outright support to an absolute constitutional execution of the recent Zambian election. To this end, the First Secretary and President of ZANU PF, Cde ED Mnangagwa, was an instrumental arbiter in influencing the then incumbent Cde Edgar Lungu to concede to the winds of change,” said Dr Mpofu.

“Guided by our President’s symbolic gestures in endorsing the will of the people in Zambia, it would be remiss for anyone to think that ZANU PF has an unexpressed sense of resentment about the outcome of Zambia’s recent plebiscite.

“It must be underscored that ZANU PF is a pro-democracy adherent party.

“Also worth underscoring is our total respect for the sovereignty of other fellow African nations.”

The ruling party said it has no business in attacking neighbouring states.

“Our consistency in this respect has a clear historical track record anchored on the diplomatic relations, which Zimbabwe has enjoyed between the interval political epochs of Father Kenneth Kaunda and Edgar Lungu’s reign.

“We have been consistent in meeting all our diplomatic obligations with the Republic of Zambia with no bias exertions on any of Zambia’s Heads of State over the years.

“Our seasoned political experience would never permit us to be drawn to the narrow preferential sentimentalism on whoever is the President of Zambia or not.”

He said the story of Zimbabwe’s liberation could not be complete without taking into account Zambia’s contribution.

President Hakainde Hichilema invited prominent opposition leaders from the region for his inauguration.

Mr Hichilema, who beat the incumbent President Edgar Lungu by a million votes in the August 12 presidential election, hosted opposition leaders from Zimbabwe, South Africa, Botswana and Tanzania, among other countries.

His United Party for National Development (UPND) said the decision to invite both incumbent and opposition leaders demonstrates that the new administration in Zambia would be different.

Joseph Kalimbwe, the UPND spokesperson, said they could not stop associating with opposition parties such as the MDC Alliance in Zimbabwe because they supported their “struggle.”

“By inviting incumbent presidents and main opposition leaders from Zimbabwe, Tanzania, Botswana and other African countries, the UPND is sending a very strong message not just in Zambia but across Africa ‘we must do away with the politics of division based on opposing views’,” Mr Kalimbwe said on Twitter.

“Support for the struggles of friends and comrades across our continent (Zimbabwe, Namibia, Tanzania- Africa) is unwavering – it will not stop.

Meanwhile, Kalimbwe told NewsDay last week that they were being attacked on social media platforms by some Zanu PF members who were criticising Hichilema’s personality and policies.

This comes after Mnangagwa’s spokesperson George Charamba sparked a diplomatic tiff with the new government of Zambia last month after calling President Hakainde Hichilema, a “sellout” over his association with opposition MDC Alliance leader Nelson Chamisa.

Charamba attacked Hichilema in May this year and repeated the undiplomatic rant last month after pictures of Chamisa meeting with the new Zambia leader at the inauguration ceremony emerged.

Charamba posted on his Twitter handle, @Jamwanda2, that Hichilema was a sell-out, raising fears that his sentiments were likely to wreck Zambia and Zimbabwe’s bilateral relations.

Hichilema defeated former President Edgar Lungu, who conceded defeat and peacefully handed over power to him.

When pictures of Hichilema and Chamisa went viral, Twitter users reminded Charamba of his provocative comments about the new Zambian leader.

“Yes, they are sellouts. What is your problem?“ Charamba said in response to lawyer Alex Magaisa, triggering a diplomatic row as relations between Harare and Lusaka appear to be starting on a rocky path. 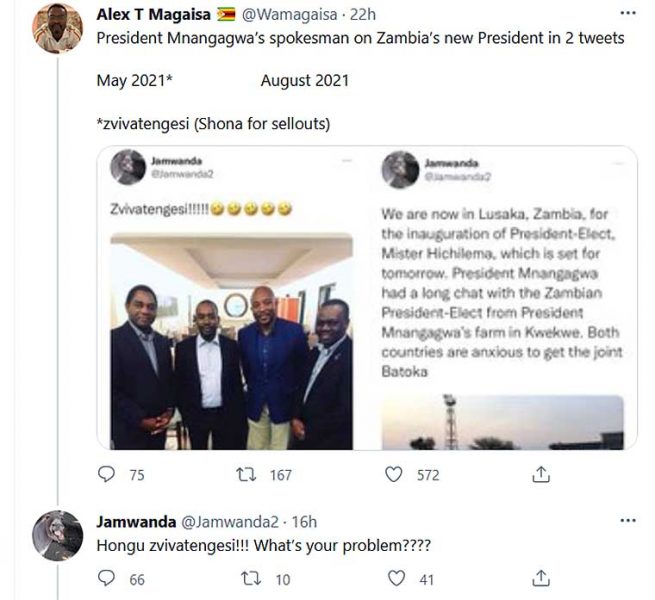 ZanuPF is a pro-democratic adherent party but not a democratic party, that’s loud and clear…!

News Muza Mpofu - 15 January 2022 1
The bar has been set high. Last week, social media went into a frenzy after the lobola ceremony of fashionista Daniella Allen and Nigerian businessman...

News Muza Mpofu - 15 January 2022 0
President Mnangagwa is now on his annual leave, taking a break after implementing crucial activities at both Government and party level. In a statement yesterday,...
Loading...

This website uses cookies to improve your experience while you navigate through the website. Out of these cookies, the cookies that are categorized as necessary are stored on your browser as they are essential for the working of basic functionalities of the website. We also use third-party cookies that help us analyze and understand how you use this website. These cookies will be stored in your browser only with your consent. You also have the option to opt-out of these cookies. But opting out of some of these cookies may have an effect on your browsing experience.
Necessary Always Enabled
Necessary cookies are absolutely essential for the website to function properly. This category only includes cookies that ensures basic functionalities and security features of the website. These cookies do not store any personal information.
Non-necessary
Any cookies that may not be particularly necessary for the website to function and is used specifically to collect user personal data via analytics, ads, other embedded contents are termed as non-necessary cookies. It is mandatory to procure user consent prior to running these cookies on your website.
SAVE & ACCEPT
wpDiscuz
1
0
Would love your thoughts, please comment.x
()
x
| Reply
Loading Comments...