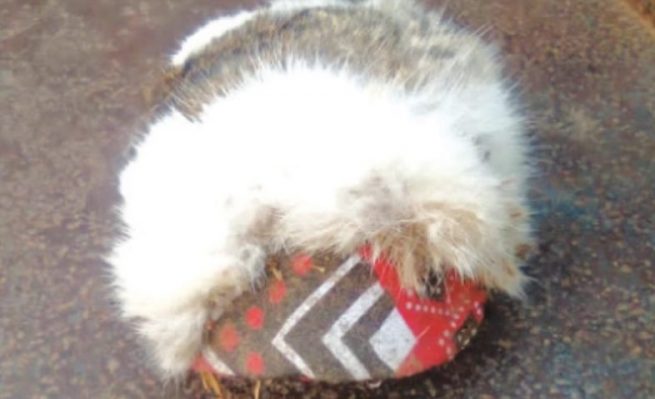 MYSTERIOUS happenings have continued stalking a Rusape woman after she recently woke up to find a live tortoise wrapped with a multi-coloured cloth (retso) and rabbit skin in her garden.

It is emerging that Ms Tambudzai Makombe and peace are now worlds apart as everyday brings something mysterious to her doorstep.

Barely a week after a mysterious fire exploded in her garden and some paraphernalia associated with witchcraft found in her yard, on Monday Ms Makombe had an unusual visitor.

The ‘visitor’, a tortoise wrapped with a multi-coloured cloth and rabbit skin was seen roaming in the garden by Ms Makombe’s grandchild who was sweeping the yard.

The tortoise was later removed by Apostle Petros Kembo.

Headman Sanzaguru, Mr Stephen Kamangira, confirmed the incident and said he is now speechless on what is haunting Ms Makombe and advised her to seek both spiritual and traditional assistance.

“I am not sure whether he killed it or not, but what I know is that he took it away. We have advised Ms Makombe to seek help from both spiritualists and traditionalists,” said Headman Sanzaguru

When contacted for comment, Ms Makumbe could only say: “I do not have anything to say. Please, let me rest.”

Apostle Kembo said he could not comment without Ms Makombe’s consent.

“She should comment on the issue first. I must find out if she is comfortable to share what is happening with the Press. As a pastor, I cannot rush to comment when the affected person is against publicity,” said Apostle Kembo.

Stones are reportedly raining at Ms Makombe’s house and recently paraphernalia associated with witchcraft, a clay pot with whitish stuff and a resto were discovered at her gate.

A white cloth and a cow horn were discovered in her yard.

A tenant at the house, Mr Owen Mupondiwa said at one occasion, a deafening sound woke them up and when they went out to investigate, they discovered that a peach tree in the garden was on fire.

“I started staying here two months ago as a tenant. This is my first time to encounter this. I woke up around 1am to attend to my phone when I heard a deafening sound outside the house. After few minutes, Ms Makombe called me saying there was a fire outside. We went out to dose the flame. We poured two buckets of water on the fire that had engulfed the small tree. The flame was so huge, but what surprised us is that it only burnt a few leaves. A small white cloth fell from the tree.

“At the gate, there was a clay pot and a multi-coloured cloth (resto). We went inside and slept, but more surprises were in store for us the following morning. We discovered a white cloth and a cow horn dumped near the fowl run,” he said.

Nelson Chamisa evacuated after gunshots were fired at his car in Mutare: Fresh details...

News Tanya Mugabe - 20 October 2021 0
Nelson Chamisa was taken to safety after his convoy was allegedly shot at in Mutare on Tuesday afternoon, the party said. His MDC Alliance party...

Harare boy who disappeared without trace in June found at a house in Bulawayo,...

News Edmore Huni - 20 October 2021 0
Police on Thursday said they had busted a “sod0my and se_xual abuse” syndicate after a Harare schoolboy reported missing in June was found at...