ATTACKS AGAINST PRESIDENT OF THE MDC ALLIANCE OF ZIMBABWE MR. NELSON CHAMISA IS AN ATTACK AGAINST DEMOCRACY WHICH ACT WAZALENDO STRONGLY CONDEMNS

ACT Wazalendo is saddened by the attacks on the President of Zimbabwe’s Opposition MDC Alliance Ndg. Nelson Chamisa. Ndg. Chamisa has survived at least two attacks with clear indications of attempted murder within seven days.

The most recent attack took place yesterday, October 19. 2021 at 11 pm Zimbabwe time, when Chamisa was on his way to visit the people when his convoy was shot. Some of the shots were fired at the car he was riding in. which clearly indicates that the attackers were deliberately trying to harm him.

The Police and gangs of the ruling ZANU PF party have been accused of participating in the attack. We are sorry that no accountable action has been taken by the government against such acts.

ACT Wazalendo strongly condemns attacks against Mr Chamisa and his MDC Alliance party. Attacks against him and his Party are attacks on Democracy within Zimbabwe and within SADC and Africa. It is an attack and sabotage against democrats anywhere in the world. Those acts should not be condoned.

We call on ZANU PF and its government to respect democratic laws and principles. Run civilized politics. Run the politics of argument and not the politics of piracy. Misuse of state apparatus to undermine the legitimate activities of the opposition parties and instill fear in the people especially the opposition supporters is a tactic that is only used by parties that have failed to legitimize themselves with arguments instead they are using force to stay in power. Africa should not continue with that tradition. We urge the authorities to stop bringing violence and political crisis into Zimbabwe. Let the Zimbabweans decide the fate of their country, and let them decide on what kind of leaders and party they see fit to lead them.

Our hope is that attacks against Mr. Chamisa and the MDC Alliance will be stopped immediately. We send solidarity message to our colleagues in MDC Alliance party and its members and encourage them to stay the course.

Moreover, ACT Wazalendo calls upon Tanzania’s ministry of Foreign Affairs to communicate to Zimbabwe authorities about these sad concerns and demand that Zimbabwe adhere to SADC Protocol on Democracy. 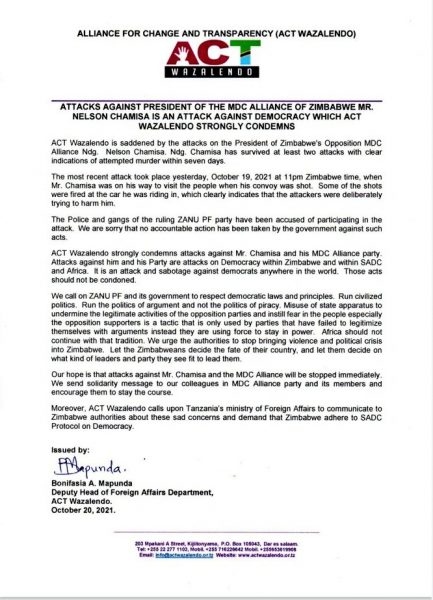