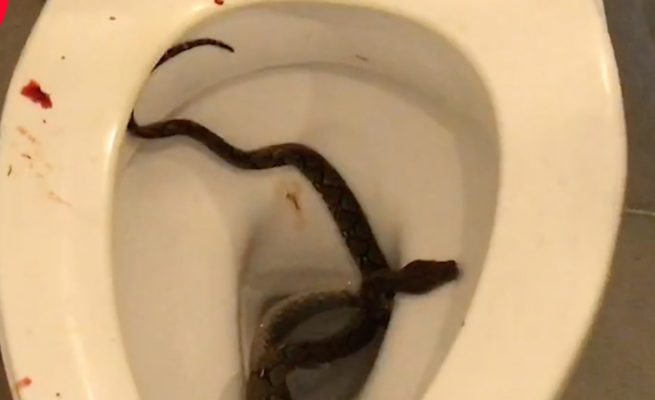 A Dutchman on holiday in Mzansi must be thanking his lucky stars after he nearly lost his geni_tals in a toilet.

The 45-year-old man from the Netherlands was bitten by a snouted cobra when he went to the bathroom to relieve himself as nature called.

But little did he know that a highly venomous snake was hiding at the bottom of the bowl, and struck him right on the testi_cles.

According to LadBible, after the snake injected its venom, the man was transported to the nearest hospital, which was around 350kms away.

The unbearable pain spread from his geni_tals to his stomach and chest as he started vomiting.

The Dutchman experienced a deep burning sensation, and his swollen geni_tals and deep purple discoloration indicated signs of ‘scrotal necrosis’, or flesh-eating disease.

“Always flush the toilet before sitting down in countries notorious for their snake population,” the medical journal warned.

Even though he was provided with emergency treatment in South Africa (anti-venom, tetanus, and broad-spectrum antibiotics), an extensive amount of the tissue in his pen_is was unrecoverable and had to be cut away, Daily Mail reports.

Doctors performed a ‘surgical debridement’, which involves thoroughly cleaning the wound and removing all hyperkeratotic, infected, and dead tissue, while his pen_is also required a debridement, LadBible adds.

After spending nine days in a South African hospital, the Dutchman was then repatriated to the Netherlands, where surgeons started the process of rebuilding his pen_is using a graft of tissue they took from his groin.