VICE-PRESIDENT Constantino Chiwenga’s estranged wife Marry Mubaiwa Chiwenga has once again brought into focus the relationship between her husband and President Emmerson Mnangagwa.

In a very revealing tweet, Marry said the power relations between Mnangagwa and Chiwenga have not significantly shifted since the November 2017 coup. She claimed that Chiwenga remains more powerful in the balance of forces between the two in party and government and revealed that the former army general “is feared by all including his boss, countless times he has said that he is above everyone and he is the one that determines the direction which the wind must blow.”

Below is Marry’s statement:

Is there hope for women in this country, is there equal representation, is there gender equality. I am being punished for crimes that do not exist in my lifetime…

Punish me once you have all your eggs in one basket., you say you want to make me an example that women are subjects and should never be allowed to lead in any fora.

How can you shut me out of my children’s life like I never existed, what do you tell them??? I have been to hell and back, I am broken by all of this, I am not saying I want you back, NO, I am saying give me my children. I thought that one day Amai would rise up and fight in my corner, guilty or not, to rise up against verbal abuse, emotional abuse and dictatorship.

Does the Minister of women exist??? There lies a man who once held the constitution in his hands, declaring war against oppression and dictatorship, a man that is feared by all including his boss, countless times he has said that he is above everyone and he is the one that determines the direction which the wind must blow.

Women are set on women to destroy one another, let us debate this, my husband has been allowed the platform to do whatever the hell he pleases and has not been reprimanded for this cowardly act, Bumbiro remutemo harishande [ the constitution doesn’t work],

I am begging all the women in this UNIVERSE, PLEASE HELL ME TO ACCESS MY CHILDREN, I am dying inside, I am empty, 2years is not a joke without having site of my children, my children are below 10, remember today it’s me, tomorrow it’s you… the likes of mamwe madzimai [some women] that speak negatively about me, stay away from my issues, you probably don’t have children and feel pity for yourself… I am asking for your help to get access to my children… I have asked the President many times to assist but nothing has materialized, this is no longer a private or family issue but a public one as we must also ask UNICEF, UN, UNHR to intervene as I am powerless. I really miss my children and I am really broken. 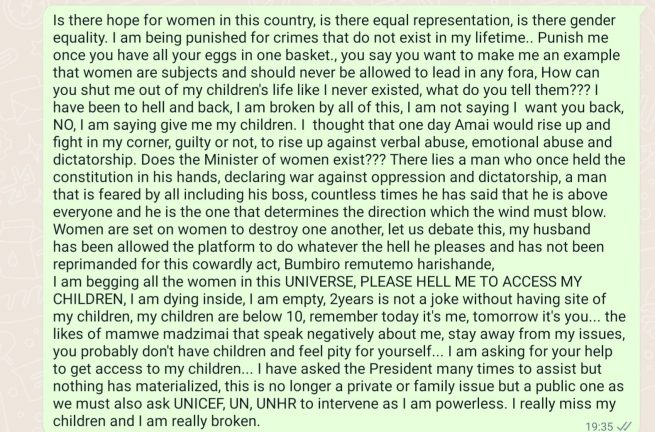