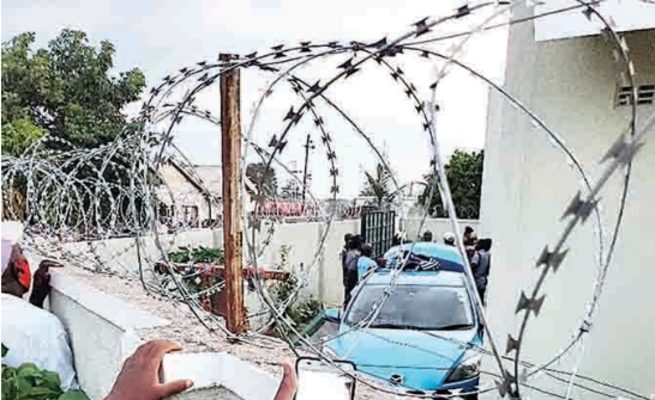 TWO Chitungwiza children died in a car boot when they were left alone at home as their guardians had gone to church on Sunday.

The duo of Samantha Rufaro Masunda, 6, and Shaine Murindi, 5, who are cousins met their fate after they locked themselves in the trunk of a Mazda Aveiro and failed to open it.

A sombre atmosphere engulfed the kids’ homestead yesterday as some family members were still trying to come to terms with the tragic death of Shaine and Samantha who were doing Grade 1 and 2 respectively.

Samantha and Shaine were staying with their aunt – a sister to their parents.

The two’s parents are brother and sister and yesterday were on their way from South Africa to attend their children’s funeral.

A source close to the on-goings said the aunt whose name could not be availed went to church in the morning leaving the children alone at home.

“It seems these two children were playing and bathed before going to play in the car.

“How they ended up in the boot is a mystery.

“Maybe they locked themselves in there as they played,” said the source.

The source said when the aunt returned from church she could not find the children prompting her and other family members to look for them.

“The search party went on till around 5pm when some suggested that they look into the car trunk which they did and found the lifeless bodies of Samantha and Shaine.

“We are hurt,” said the source.

The two infants’ uncle referred all communication to the deceased children’s parents who are still on the South African side on their way to attend the funeral.

“Police are investigating a sad story whereby two kids were found dead in the boot of a Mazda Aveiro.

“They had been left by their aunt around 8am as she went to church.

“On her return she could not locate them and then with neighbours and other family members, they looked for the children who they found around 5pm dead in the car boot.

“As police we urge parents and guardians to ensure that whenever they leave homes, children are safe,” he said.

Why were they left behind…….

News Muza Mpofu - 15 January 2022 1
RAPE-charged cleric Tapiwa Freddy claimed Friday that his accuser, a ZBC radio presenter, got angry with him after he ended their relationship. This emerged as...

News Muza Mpofu - 15 January 2022 0
President Mnangagwa has gone on his annual leave that is expected to run until February 5 2022. In a statement released this morning, Chief Secretary...

Technology Muza Mpofu - 14 January 2022 0
Investing in cryptocurrency has been sceptical to most since it seems new and complex to most individuals. There are still a lot who are...
Loading...