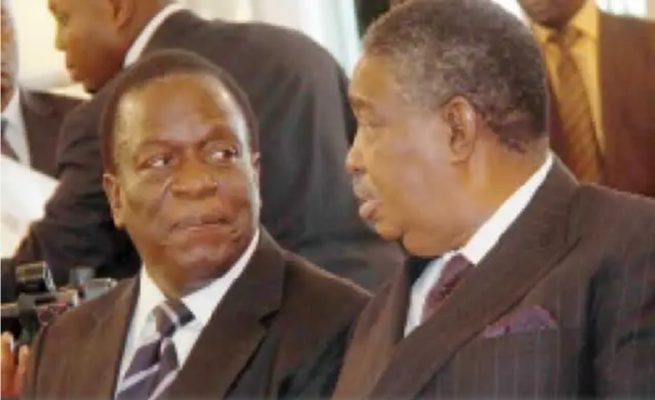 In the application, Musengezi cited Mphoko and the party’s former secretary for administration Ignatius Chombo.

Although Zanu PF, Mnangagwa, Chinamasa and Mpofu have jointly filed their opposing papers, their lawyers last week wrote to Musengezi demanding that he withdraws the case within seven days or face heavy legal costs.

Musengezi lawyers confirmed that Mphoko failed to tender his opposing affidavits, an indication which the lawyers say the former vice president is in agreeable with the applicant.

“I can confirm that Mr Mphoko has not opposed our client’s application. He is now the second respondent to ignore the application after Mr Chombo also failed to do so. So basically, what this means is that the two respondents have no objections to issues raised in the application,” said Nqobani Sithole, one of Musengezi lawyers in an interview with Newzimbabwe.

Following the November 17, 2017, military coup which ousted longtime ruler Robert Mugabe, Chombo was arrested by soldiers while Mphoko briefly sought political asylum in neibhouring Botwsana before he come back.

Musengezi is arguing that the November 19, 2017 Zanu PF central committee which appointed Mnangagwa as the party ‘s president and first secretary was in violation of the party’s constitution and therefore unlawful and null and void ablnito.

“This is a court application in terms of Section 14 of the High Court Act Chapter 7:06 for declaratory orders and consequential relief in the following terms, a declaratur that the special session of the central committee of the 1st respondent convened on the 19th of November 2017 at the party’s headquarters in Harare from 10: 00 to 16 :00 hours was ultra vires the provisions of the Constitution of the 1st respondent and therefore unlawful and null and void ablnito.

“A declaratur that all the resolutions of the special session of the Central Committee of the 1st respondent passed at the unlawful meeting concerned on the 19th of November 2017 are unlawful, invalid and accordingly set aside,” reads part of Musengezi’s application.

He also wants Mphoko to convene and preside over a special extraordinary congress of the 1st respondent for the purpose of regularising the top leadership positions in the 1st respondent within three months of the granting of the order.