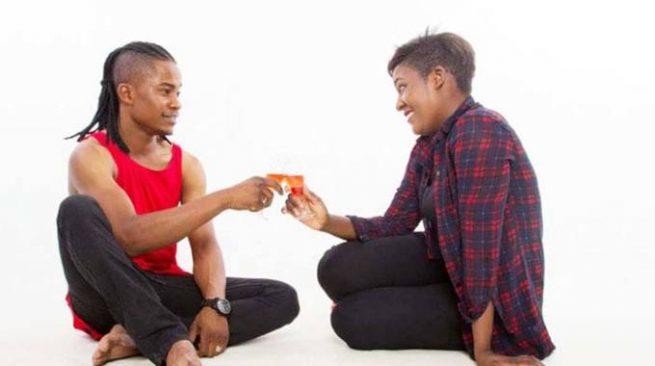 The Afro-fusion singer said the rumours were being peddled by detractors who do not want “to see him happy”.

The couple reunited some three or so months back after spending some time apart, during which the “Dherira” hitmaker publicly flirted with two different women on different occasions, both of whom he promised to marry.

But, there are claims the singer’s marriage is not smooth-sailing. It is alleged that Andy Muridzo recently got hold of steamy messages between Mai Keketso and his former manager.

And the reports further suggest that this is not the first time the talented singer has caught his wife offside. In fact, it is alleged that this was the reason they separated in the first place.

However, the musician said he was dumbfounded by the rumours.

“To be honest, I was shocked by the gossip. Those are just false and malicious statements being spread by my detractors. They are against my happiness and want to see me suffer,” he said.

His life, he added, is now back on track after reuniting with his family.

“I know some are wishing me bad, but I have no problem with my wife at the moment. We are enjoying every moment of our love life.”

Mai Keketso said she was not in the least concerned by the rumours.

“We are being targeted by jealous people who are not happy to see us together. They are trying every trick possible to separate us again. However, I say shame on them. We are now inseparable till death do us apart,” she said.

Preparations for the 11th edition of the Zim hip-hop awards, which are pencilled in for December 11 in Bulawayo, are currently underway. Some of the nominated artistes include Holy Ten, R Peels, Kikky Badass, Crooger, Volts and King 98.

According to organisers of the event, Holy Ten, whose real name is Mukudzei Chitsama, is presently leading on public votes for the Best Hip-Hop Artiste award.

Adrian Harrison (also known as Beefy), founder of the Zim hip-hop awards, told The Sunday Mail Society that it was a tight race.

“I can confirm that as for now Holy Ten is leading, followed by Kikky Badass and the duo of Muse and Asaph.

“Preparations are progressing well and we hope to host a flawless event on December 11.”

The rebirth of Smartex

Zimdancehall chanter Smart Mapfumo, or Smartex, is back in the groove.

The musician’s career failed to blossom in the past decade due to financial constraints and poor management.

However, his fortunes have since changed for the better.

Smartex received a boost from Harare businessman Jomola Chitomborwizi (Boss Jomola), who has offered to assist him financially.

The dancehall singer worked under the Mafia 19 stable, which is led by Guspy Warrior, between 2011 and 2016 before they parted ways following some misunderstandings.

“I left Mafia 19 in 2016. Since then, I have been working alone and the going has been tough,” said Smartex.

“However, some six months back I extended a begging bowl to Boss Jomola and he has now agreed to work with me after realising my talent and potential.”

The businessman-cum-promoter said he will do everything possible to support the artiste’s music career.

“Smartex came to me for help. I realised his talent and decided to help him with everything he needed to revitalise his works,” he said.

He has since released a new seven-track album titled “Zvishandwa”.

“Zvishandwa” and “Mikono” made it into Power FM’s top ten weekly music chart.

“I want to warn my colleagues that it’s game on,” he said.