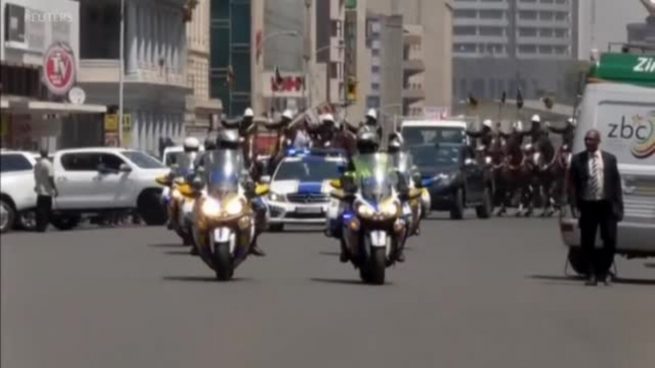 Soldiers that were part of President Emmerson Mnangagwa’s escort yesterday assaulted a Harare motorist and later detained him on charges of intercepting his long motorcade.

The incident happened at the intersection of Seke and Cripps roads in the morning.

Malvern Samakande was detained at Mbare police station after police cut him off and assaulted the 25 year-old on charges of obstructing the presidential motorcade.

He was only released after paying an admission of guilty fine of $2000 following the intervention of Human Rights NGO Forum lawyer Nobel Chinhanu. Chinhanu confirmed the incident.

“The Forum has attended today at Mbare Police Station to represent Samakande, who was accused of failure to obey road signs and signals,” he said.

“Allegations are that Samukande failed to give way to the presidential motorcade.

“It was alleged that Samukande failed to obey multiple police officers stopping movement of traffic and was only stopped by the presidential guards.

“He was released after the payment of an admission of guilty fine.”

Several motorists were in the past assaulted by the late former president Robert Mugabe and now Mnangagwa’s security men for not giving way to the presidential motorcade.

Riders on the motorcade have also been killed after motorists failed to observe the unwritten law of giving way to the presidential motorcade.

In 2016, Joseph Chakanetsa was jailed two years for cutting Mugabe’s motorcade in the capital after the court found him guilty of negligent driving.

He was slapped with another 60-day jail term for failing to stop after committing the offence.

His driver’s licence was cancelled and he was banned from driving heavy vehicles and public transport for life.

He had been convicted on his own plea of guilty.

During the same year, two Zimbabwe Republic Police members allegedly intercepted Mugabe’s motorcade in Harare and assaulted two of his outriders after they had been ordered off the road.

They were arrested and dragged to court.

“…the unwritten law of giving way to the presidential motorcade.” Is there no written law about Police vehicles showing BLUE lights and/or sounding sirens? Please do not DELIBERATELY misinform the young generation who might not know much of law.

News Muza Mpofu - 15 January 2022 0
The bar has been set high. Last week, social media went into a frenzy after the lobola ceremony of fashionista Daniella Allen and Nigerian businessman...

News Muza Mpofu - 15 January 2022 2
RAPE-charged cleric Tapiwa Freddy claimed Friday that his accuser, a ZBC radio presenter, got angry with him after he ended their relationship. This emerged as...

News Muza Mpofu - 15 January 2022 0
President Mnangagwa has gone on his annual leave that is expected to run until February 5 2022. In a statement released this morning, Chief Secretary...
Loading...