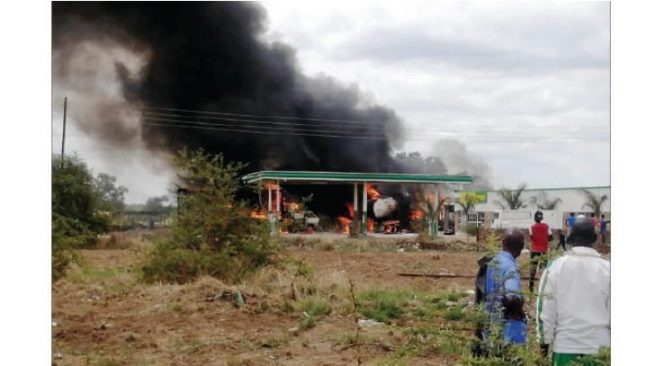 Property worth thousands of United States dollars was lost when a fuel tanker loaded with diesel, two haulage trucks, five vehicles and two commuter omnibuses were burnt at a service station in Gweru yesterday.

The vehicles which were parked at a service station in Claremont suburb were reduced to shells yesterday afternoon.

Fire fighters from Gweru City Council who arrived at the scene about 30 minutes after the fire broke out failed to put out the fire after they ran out of water.

A garage attendant who witnessed the fire Mr Thomas Msipa said the origins of the fire were still a mystery.

“The fuel tanker was just parked waiting to offload diesel since we had no Zesa,” he said.

Mr Msipa said there were other trucks and omnibuses that were parked at the service station.

“Nothing was happening since we didn’t have Zesa and from nowhere, there was a fire which engulfed the tanker, the commuter omnibuses and we are still to ascertain where it came from,” he said.

Another witness claimed the fire started from a commuter omnibus that developed an electrical fault.

“The fire came from one of the commuter omnibuses and we suspect it could have been an electrical fault. It then spread to other trucks and there was a huge explosion after the fuel tanker caught fire,” said the eyewitness on condition of anonymity.

Gweru Chief Fire Officer, Mr Felix Muguti who was at the scene said they were investigating the origins of the fire.

“Our fire tender has gone into the city to refill after we ran out of water and for now, we are concentrating on putting out the fire,” he said.