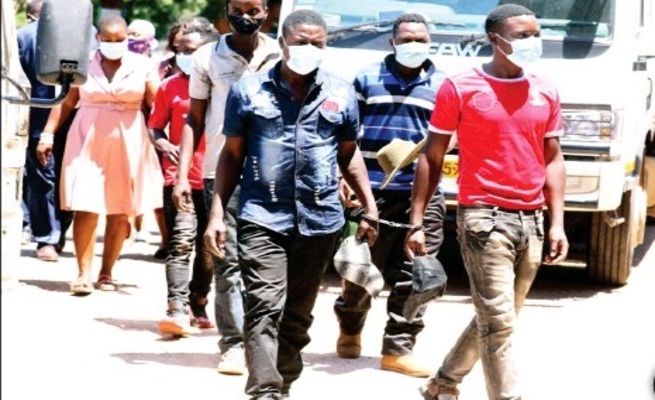 THE wife of bus operator Decent Rimbi of Rimbi Travel and Tours, yesterday appeared in court on allegations of hiring a gang to rob and assault one of his female employees on suspicion that she was having a love affair with her husband.

Everjoy Rimbi (40) appeared at the Harare Magistrates Court on allegations of hiring a gang to assault Nomalanga Todlana, whom she was suspecting of having a love affair with her husband.

Rimbi, who was represented by lawyer Mr Godfrey Unzemoyo, was not asked to plead to the charges when she appeared before magistrate Mrs Barbra Mateko charged with conspiracy to commit robbery. She was remanded out of custody to January 25 on free bail.

Rimbi was jointly charged with Melisa Muzuva, Washington Njengwe, Richard Chikwaya, Givemore and Tafadzwa Mazerenganwa and Brighton Chiketa, who were all freed on $20 000 bail each.

Pamela Mutunhairi, who also jointly appeared with Rimbi and the alleged hired gang, was remanded on free bail.

The State led by Mr Anesu Chirenje had it that sometime between August and November this year, Rimbi discovered some text messages in her husband’s cell phone that suggested he was having an affair with their employee, Todlana.

Allegations are that Rimbi decided to have Todlana robbed, harassed and scared away from her husband.

She then allegedly engaged Melisa Muzuva through Pamela Mutunhairi after getting her contact details in a WhatsApp group.

Rimbi allegedly asked them to mobilise a gang which would harass Todlana.

Mutunhairi allegedly linked Rimbi and Muzuva and facilitated payment of an initial deposit of US$150.

On December 7 at around 9am, an unknown person went to Mr Decent Rimbi’s garage and alerted him of the impending plan and how it was to be executed.

At around 5pm, the gang, armed with two machetes, went to Rimbi Tours’ garage in New Ardbennie, Harare, while driving Honda Fit (ADW 8431).

Upon arrival, Njengwe, Chikwaya, Givemore and Tafadzwa Mazerenganwa and Chiketa were subsequently intercepted and arrested by the alert detectives before executing their mission.

They then implicated Rimbi’s wife as the mastermind of their plan.