The robbers were reportedly looking for a residence which is about five houses away from Nemaisa’s.

Nemaisa, who was not at home when the suspected robbers took hostage of his family, managed to kill three of the suspects upon his return.

Two other suspected robbers escaped, but were arrested by police the following day.

“Comprehensive police investigations have revealed that Nemaisa’s family was a case of wrong target as Shine Tanaka Nyamhunga had given his accomplices some information on some cash transactions by a company where he is employed,” said Assistant Commissioner Nyathi.

“He told his accomplices that the money is kept at his employer’s house in Chadcombe.”

Police, however, say Shine’s employer stays about five houses away from Nemaisa’s residence.

“The attack on Nemaisa’s residence is, therefore, a case of mistaken identity or target as Shine Tanaka Nyamhunga was in constant touch with Tariro Gora with a view of having his employer targeted by the armed robbers,” said Assistant Commissioner Nyathi.

The suspects are now linked to five counts of armed robbery which occurred in Marondera, Belvedere, Hatfield, Cold Comfort and Mabelreign in Harare, where property worth more than US$52 300 was stolen.

Police enquiries have shown that the 22 rifle fitted with a telescopic sight and 303 rifle recovered from the robbers were stolen from a complainant in Marondera on November 15, 2021.

“An Ak 47 rifle was also recovered from one of the suspects, Wirimai Nyandoro’s residence,” said Assistant Commissioner Nyathi.

“Investigations to link the suspects to more other cases are still underway as police are hunting other suspects and accomplices linked to the gang.” 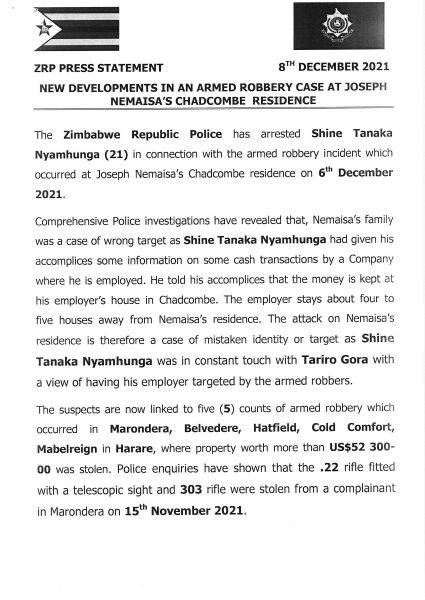 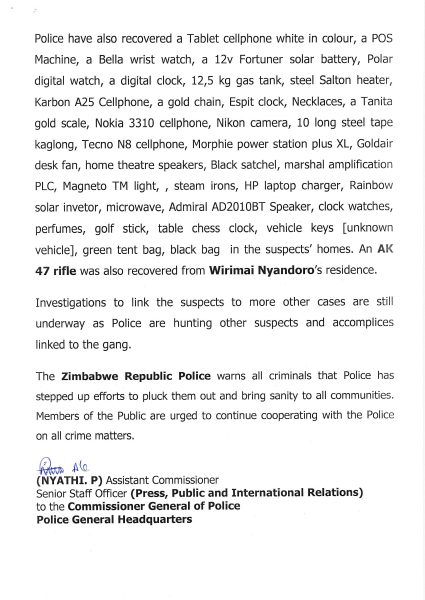