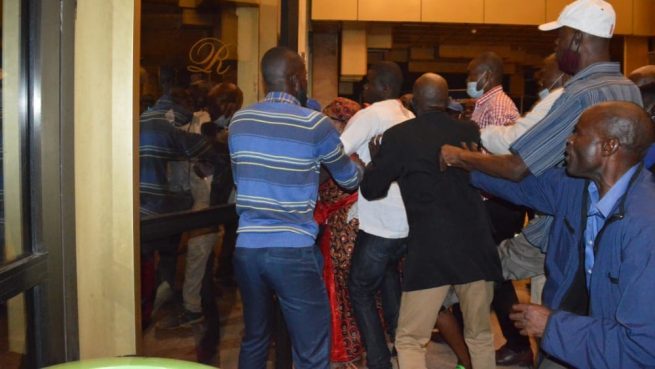 THE MDC-T Vice President Thokozani Khupe has through her lawyers demanded minutes of a recent national council meeting as she suspects the opposition party deliberated on recalling her from Parliament.

The national council meeting was held on 26 November at the Morgan Richard Tsvangirai House, popularly known as Harvest House in Harare.

In a letter to MDC-T secretary-general Paurina Mpariwa, Khupe’s lawyers Ncube Attorneys wrote: “We have been advised by our client that on the 26th of November 2021, and at Morgan Richard Tsvangirai House, there was a national council meeting which was held in the capital city. In that meeting, there were certain words that were used by some members which were clearly of tribalistic nature.

“Further, we have been advised that it is in that meeting where certain recommendations were made to recall Doctor Khupe and others from Parliament and local authorities. We are advised that your good office is in possession of such minutes and resolutions.”

Khupe’s lawyers added: “We request that your good office shares with our client the minutes and the resolutions of the national council of the 26th of November 2021 urgently so that we could be in a position to take full instructions.

“We have it on good authority that the intended recalls are due anytime, therefore, we expect to hear from yourselves as a matter of urgency.”

Khupe was present in that national council meeting.

However, in an interview with NewZimbabwe Saturday, the MDC-T spokesperson Witness Dube denied Khupe’s allegations saying they were “laughable”.

“Yes, we have received the letter, but where did she see us plotting? She was there in the meeting. So, is it not that strange that she is requesting minutes which have not been passed?” he said.

“We had a national council meeting, which had minutes and those minutes must be passed in our next meeting. What minutes does she want when they have not been approved as the correct record?

“She is alleging that we are plotting to expel her. Who is plotting and where? This is laughable. There is nothing to talk about here, she has gone to court, and we will see how the legal route she has taken ends,” Dube added.

MDC-T President Douglas Mwonzora and Khupe were instrumental in recalling scores of MDC Alliance MPs and councillors from office on claims they were no longer party members. The MDC Alliance is led by Nelson Chamisa.

Khupe and Mwonzora engineered the recall of dozens of MDC Alliance members from Parliament and local authorities claiming they were no longer party members. By-elections for the recalled MPs and councillors are expected to be held before next March.