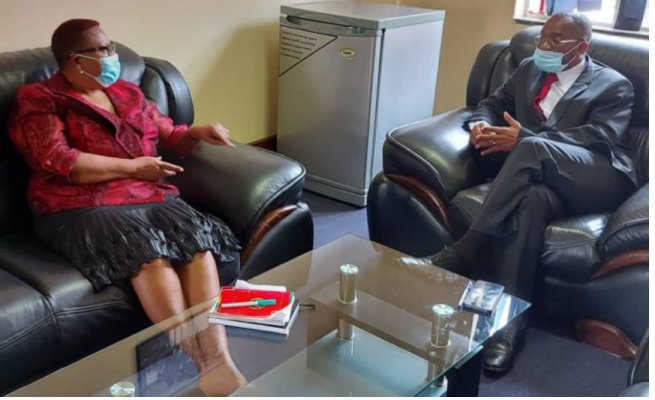 DAGGERS have been drawn in the battle for power in the Douglas Mwonzora led MDC-T outfit, amid revelations that its deputy president Thokozani Khupe is being targeted for recall from Parliament and eventual ouster from the fractured opposition party.

Khupe has now engaged lawyers demanding that the MDC T, which she accused of being tribalistic, comes out clean on attempts to push her out of power.

In a letter delivered to party secretary general Paurina Mupariwa on Friday, Khupe’s lawyers Ncube Attorneys alleged the party held a national council meeting on November 26 where they plotted to recall her.

“We have been advised by our client that on 26 November, and at Morgan Tsvangirai House, there was a national council meeting which was held in the capital city. In that meeting there were certain words that were used by some members which words were clearly tribalistic in nature,” wrote lawyers for the former deputy prime minister.

Khupe alleged that during that meeting, the national council resolved to recall her and other legislators accused of not backing Mwonzora and working against his leadership.

The MDC–T vice president snubbed a recent meeting of the party’s shadow cabinet, and has not been showing up at some of the party programmes.

“We are advised that it is at that meeting where certain recommendations were made to recall Dr Khupe and others from parliament and local authorities. We are advised that your good office is in possession of such minutes and resolutions,” the lawyers wrote.

Khupe is demanding that she be furnished with the minutes of the meeting and why she has been placed on notice for recall.

MDC-T acting chairman, Giles Mutseyekwa, however denied that the party wanted to recall Khupe, saying there was never such a meeting.

“The last national council meeting we had, Khupe was in attendance and she was the first to even contribute as she was saying we should delay holding our congress,” Mutseyekwa said.

“She told us that the party needed more time to prepare for our congress but we felt that we have to do it as a matter of urgency. So, it will be interesting to see the letter in which she alleges these things.

Mwonzora’s MDC T has not recovered from the chaos of the December 2020 congress and is reportedly battling widening cracks.