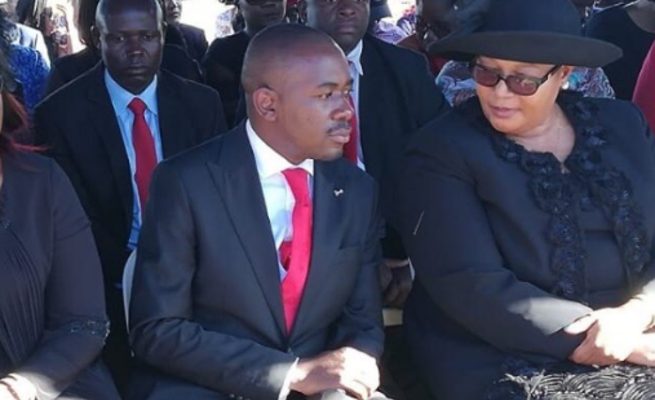 Talks between Khupe and MDC Alliance leader Nelson Chamisa have caused ructions in the MDC-T which is reportedly planning to recall her from parliament.

Khupe flew into a stroppy fit in December last year after losing the MDC-T presidency to Douglas Mwonzora. She accused Mwonzora of “rigging”, before reluctantly accepting the result.

MDC-T insiders say Khupe never fully accepted her defeat, and attempts to heal the rift with Mwonzora have so far failed.

“The lines of communication between the Khupe and the MDC Alliance leadership are very open, and very busy,” one MDC Alliance official said.

Khupe’s growing disquiet opened a flank for Chamisa to woo her back into the fold as he bids to strengthen the MDC Alliance in Matabeleland, where Khupe remains a political force.

Chamisa has also reached out to other MDC founding leaders in Matabeleland including former chairman Lovemore Moyo and the former organising secretary Abednico Bhebhe, who joined him on his tour of Matabeleland South last month.

Chamisa’s spokesman Nkululeko Sibanda said: “President Chamisa wants to lead this country and building a nation is not a partisan enterprise. His focus is to get every citizen to support change.”

Sibanda refused to discuss Khupe specifically, only saying: “The MDC Alliance stands ready to welcome all comrades who underestimated Douglas Mwonzora’s complicity and connivance with the regime to frustrate change.”

Khupe’s spokesman Ntando Ndlovu denied she has held talks with the MDC Alliance.

“Dr Khupe would like to place it on record that she has never held any discussions with any party about working together or anything of the sort,” Ndlovu said.

Khupe’s lawyers wrote to the MDC-T secretary general Paurina Mupariwa on December 6 raising concerns about a resolution allegedly passed by the party’s national council to recall her and her supporters from parliament.

The lawyers claimed a national council meeting held on November 26 passed a resolution “to recall Dr Khupe and others from parliament and local authorities” and that the intended recalls “are due anytime.”

MDC-T spokesman Witness Dube said: “It is entirely open for speculation why madam vice president Khupe would come out of a national council meeting only to seek an audience with her lawyers about what she calls plots to remove her from parliament.

“Broadly speaking however, I must say that all political parties reserve the right to recall errant members of parliament who are no longer serving the interests of the party, people who are no longer good for the cause.

“It is provided that we can recall a member of parliament because they have automatically expelled themselves by joining another party or they now represent interests that are contrary to those of the party. But as we stand, no person has been announced as recalled.”

ZimLive understands the MDC Alliance secretary general Charlton Hwende has been the point person in discussions with Khupe, who has so far only spoken to Chamisa by phone. Hwende declined to comment.

“There’s no shortage of positions,” said one MDC Alliance official. “When she does rejoin she will get a respectable position, she’s one of the founding leaders and despite all that has gone on, she deserves her place in leadership.”

One of Khupe’s loyalists said she and her supporters were being “decimated” by Mwonzora who wants to build his support base by recalling rivals and appointing his own supporters.

Despite her poor electoral showing, MDC Alliance officials point to the significant symbolism of making peace with Khupe after her acrimonious exit from the party in 2018 in a power squabble with Chamisa which followed the death of founding leader Morgan Tsvangirai.

“This will send a message to the party rank and file that the MDC Alliance is growing, not declining. Welcoming Khupe would also be a testament to the maturity of the party’s leadership because when all is said and done, she has been one of our most important leaders,” an MDC Alliance official said, asking not to be named because of the sensitivity of the matter.