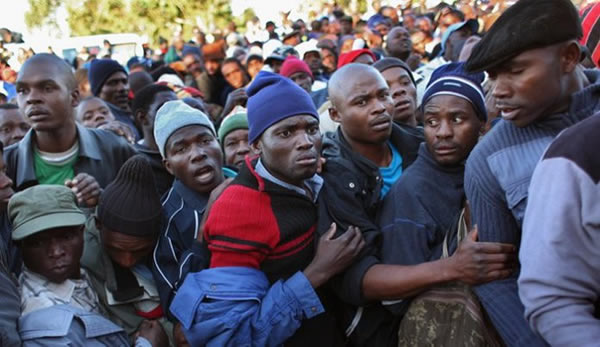 South Africa’s government on Monday quietly reversed its decision to send 250,000 Zimbabweans home after terminating their special visas which had allowed them to stay in Africa’s most industrialised country since 2009.

No reasons were provided for the about-turn which came as Zimbabweans had gone to court to fight “cruel” conditions set for them during a 12-month grace period, including a withdrawal of financial services unless one proved that they have applied for a mainstream work permit.

Sharon Ekambaram, head of the Refugee and Migrant Rights Programme at Lawyers for Human Rights in Johannesburg, welcomed the reversal.

“It does call for a debate on how we manage movement in the region without infringing on peoples’ human rights and their dignity,” Ekambaram said.

The plan had been to end the permits on December 31, and allow permit-holders to apply for different visas or be deported after 12 months. It remains unclear what the government now intends to do with the permit holders, with an announcement expected before Christmas.

Before Monday’s surprise U-turn, the Zimbabwe Exemption Permit (ZEP) Holders Association and non-profit organisation African Amity had filed an urgent application before the High Court in Johannesburg to overturn the government decision not to renew the permits.

The permits expire at the end of December 2021, after which the Department of Home Affairs has instructed the holders to apply for “mainstream visas” during a 12-month grace period.

The Home Affairs directive went on to advise companies, employers, learning institutions and banks to discontinue services to those in possession of a ZEP unless they submit proof of their application for a mainstream visa.

Emma Dimairho, deposing for African Amity, said this requirement is impossible to meet, “unreasonable, unfair, cruel and leaves thousands of ZEP holders in jeopardy of losing their jobs” as well as financial services. The earlier decision by Home Affairs would cause irreparable harm unless the court intervenes on an urgent basis, said the court application.

The case was due to be heard on an urgent basis on Tuesday, December 14, but it is not clear if it will still go ahead.

The cabinet’s November 25 decision to end the permits drew a chorus of complaints from human rights groups who argued that Zimbabweans who have been living in South Africa for more than a decade were going to be sent back to a country with few economic opportunities and high levels of political repression.

Had the plan gone through, the Zimbabwean permit-holders’ lives would have been disrupted, with children denied the opportunity to register for school, employers refusing to renew work contracts, and banks denying services or withholding access to accounts, Ekambaram said previously in a letter signed by 46 organisations.

South Africa has a population of about 60 million, including about three million migrants, according to government statistics. Many are Zimbabweans driven south by two decades of politically linked violence and economic collapse. The majority are undocumented and do not hold the permit.

South Africa has been plagued by recurrent bouts of xenophobic violence since at least 2008, with foreigners often accused of taking jobs in a country where a third of the workforce is unemployed.