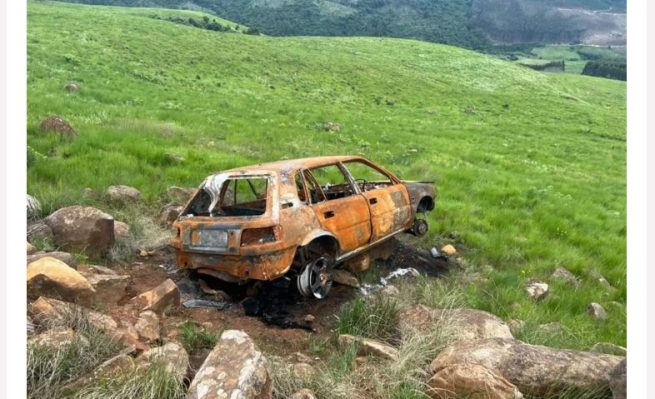 THE KZN family of five that has been missing for 24 days was found dead on Tuesday, 14 December.

Among the remains, there was the body of two-year-old Fanelesibonge and one-month-old Libra Ngcobo.

According to police spokesman Brigadier Jay Naicker, on 11 December two suspects aged 25 and 27 were taken in for questioning after the five family members went missing.

He said the two men were caught at KwaZinqamu in Elandskop, Pietermaritzburg.

“The men were questioned regarding the disappearance of the family. The victims were kidnapped from their farm in Boston just outside Pietermaritzburg on 16 November. Their vehicle was also missing. The missing persons were reported at Boston SAPS on 19 November,” he said.

Naicker said a joint operation was conducted on Monday, 14 December, which led the team to Byrne in Richmond where the victims’ vehicle was found burnt.

“Further investigation led the police to a plantation in Richmond where the gruesome discovery was made. The five burnt and decomposed bodies of the missing victims were found,” he said.

He said more arrests are imminent as investigations progress.

“The two suspects have been formally charged for murder and kidnapping. They are expected to make their first appearance in the Richmond Magistrates Court soon,” said Naicker.

KZN police commissioner Lieutenant-General Nhlanhla Mkhwanazi congratulated the team who made the breakthrough.

“Over the days after the family went missing, a team comprising of various role players from the SAPS and Magma Security joined the search for the missing victims. The team worked tirelessly after the matter was reported to ensure that the missing victims were found and that justice is served. At this stage investigations indicate that their deaths may be linked to a family feud,” he said.