Zimdancehall artiste Emegy Sylvester Chizanga, popularly known as Freeman, was on Tuesday questioned by police after a picture of himself and one of the three robbers gunned down during the Chadcombe shoot-out started circulating on social media.

The circulation of the picture and the shooting of the armed robbers came just a few days after Freeman released his album titled “Robbery”. 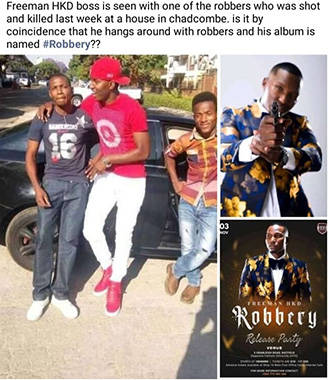 In the picture, Freeman was with one of the armed robbers, Charles Chirara, hugging behind a parked car.

This prompted detectives from the CID Homicide Section to contact him so that he could clarify the association.

Freeman was summoned at Harare Central Police Station on Tuesday morning where he was questioned and released after a few hours.

Sources close to the investigations said when he was questioned, Freeman revealed that the picture was taken sometime in 2016 and that he personally knew Chirara as a fan and voluntary show bouncer.

He said Chirara, who was shot dead by former CID detective Joseph Nemaisa, used to attend his shows as a fan.

Freeman said he was not aware that Chirara was an armed robber since he did not inquire much into his fans’ private lives.

He further said he did not know that Chirara, a former soldier who used to attend his live shows and asking for photographs, was an armed robber.

He only learnt from the media when Chirara was gunned down at Nemaisa’s house.

The picture of Freeman and Chirara that has been circulating has a message which reads, “Freeman HKD Boss is seen with one of the robbers who was shot and killed last week at a house in Chadcombe.

“Is it by coincidence that he hangs around with robbers and his album is named Robbery.”

The three armed robbers were shot and killed during a shoot-out after they had raided the Chadcombe home.

Police have since arrested three suspects so far in connection with the case. A number of firearms have also been recovered.

Nemaisa, doing business in Chisipite, sped home after getting a call from his son that the family was being attacked by robbers, climbed over his back wall, fired a couple of warning shots and then shot dead three of the armed robbers about to torture his wife with an electric iron and who had already assaulted his family.

More remarkably, two of the robbers were armed with rifles or assault rifles, but while severely out-gunned Nemaisa used his training and almost two decades of experience in the CID to win through.

They were identified through the National Fingerprints Bureau and the Police Scenes of Crime experts.

Those arrested by CID Homicide are former constable Francis Takura (33) and a soldier Private Virimai Nyandoro (37) and the informer, Tanaka Shine Nyamunga (21).