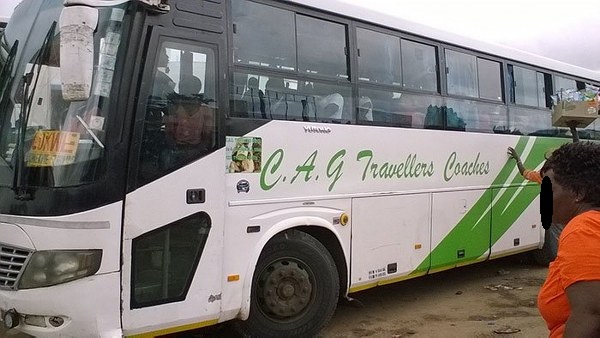 FIVE armed robbers attacked a CAG Travellers Coaches bus on Tuesday at around 6.30pm at the 325km peg along the Harare-Chirundu highway, undressed all passengers before escaping with the clothes and more than US$20 000.

The suspected robbers were wielding an unknown firearm, which they used to scare passengers and the bus crew.

The robbers stole US$19 050, R2 000, $690 and K1 137, and other valuables. They had boarded the bus in Karoi pretending to be genuine passengers. Police are anxious to hear from anyone who might be able to give information.

In an interview, CAG director Dr Sam Nanhanga said the suspects boarded the bus in Karoi intending to go to Chirundu.

“I am told one of them pretended to be feeling like vomiting while walking in the aisle. He pulled out a gun and fired two shots into the roof of the bus and the other pulled out another gun and shot the screen of the bus. They then ordered everyone on the bus to remove their clothes and put them in a sack which the other robber was holding. All the men and women were stripped nak_ed.

“The challenge I have is that there is a man who was seen by the passengers, before waving for the bus to stop intending to board as a passenger. When the bus tried to stop, the robbers said if the bus stops they were going to kill everyone. The man then sped off and reported the incident at a roadblock that was 2km away, which means the incident happened 2km before the next roadblock,” he said.

Dr Nanhanga said the people who robbed the bus had pistols while their colleagues who followed the bus with a small car had larger firearms, which could have been easily identified if one attempted to board the bus.