Chiwenga retired from the helm of the defence forces soon after orchestrating the November 2017 military coup to become vice president.

He was succeeded as commander of the defence forces by General Valerio Sibanda.

Mubaiwa who has been in and out of court over the past two years on several criminal and civil cases, including attempting to kill Chiwenga, forgery, and money laundering.

“My husband VP Chiwenga is not a politician, he was never one and never will, my husband took his military hat of Commander into his place of work now,” Mubaiwa said in a tweet.

“He commands. He is doing military touch into his place of work; soldiers still take instructions from him.” 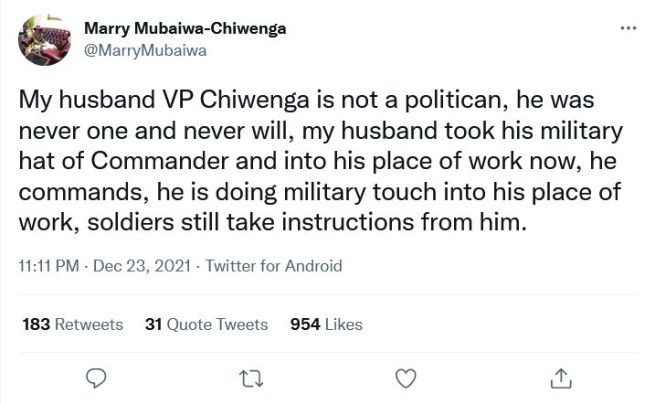 Marry’s averments come at a time Chiwenga is reportedly fighting a major factional war with Mnangagwa.

They lead distinct, militarised factions fighting for control of the heart and soul of Zanu PF and state levers of power.

Marry has also previously disclosed how Chiwenga was obsessed with the idea of succeeding Mnangagwa, saying he is making moves to win the presidency by hook or otherwise.

Chiwenga, on his part, has publicly pledged loyalty to Mnangagwa, claiming all he wants is to fight for Zanu PF and its leader to remain in power.

However, his sentiments have found few takers, with watchers repeatedly describing them as banter aimed at appeasing his principal.

Since assuming power in 2017, Mnangagwa has spent the better part of his reign consolidating his power base and coup-proofing himself through purging military bosses thought to be sympathetic to his ambitious deputy.