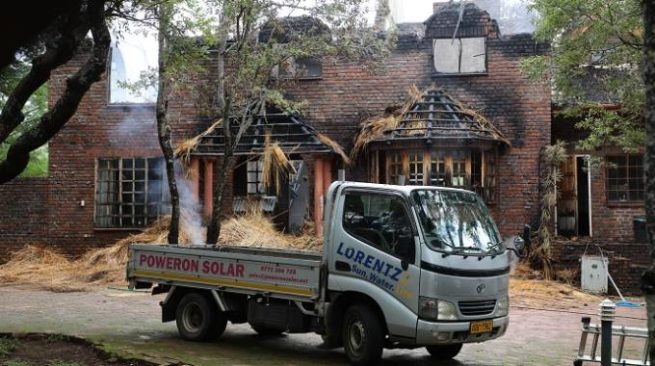 A STRAY fire cracker landed on a thatched house, ignited and razed down a portion of a plush two-storey property in Harare’s leafy northern suburb of Greystone Park as people celebrated the crossover into the New Year.

The incident happened around midnight when people started blasting fire crackers in the normally serene and quiet neighbourhood.

The fire consumed much of the house’s thatched roof while household property worth thousands of dollars was destroyed, although no fatalities were recorded. When The Sunday Mail visited the house yesterday, it was all rubble and smoke at the property.

A resident at the property, Mr Breit Spark, said:

“It happened at midnight, I was sleeping when I heard a loud bang of a firecracker exploding and moments later I found the house had caught fire — I am very certain it was a firecracker that ignited the house.

“We got assistance from neighbours who came quickly to assist with getting some of the furniture out”.

Mr Spark said there was a swift response from the City of Harare Fire Department, as firefighters managed to douse the inferno.

“Were it not for the kindness and assistance of neighbours and the dedicated hard work from the fire department, things could have been much worse,” he added.

“I can confirm that there was a fire that broke out at a two-storey property in Greystone Park and our team responded swiftly to the incident and managed to save some section of the house.

“We could not establish the cause of the fire during that time because our primary objective in such incidents is to save life and property.

“We will wait for our investigation to ascertain the cause of the fire,” he said.

Police last week warned members of the public against using firecrackers to celebrate the New Year, noting that the fireworks pose a serious danger to humans and animals.