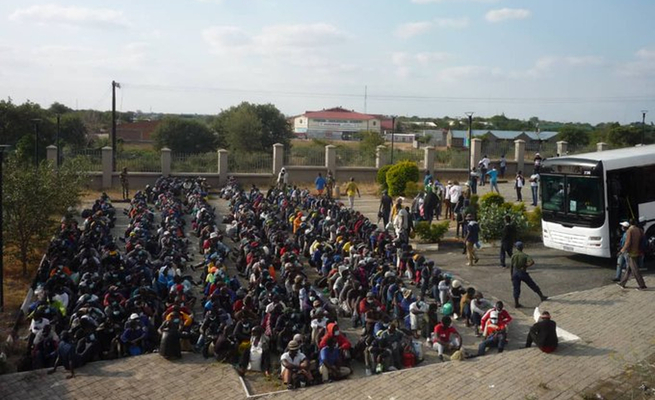 The opposition Movement for Democratic Change Alliance led by Nelson Chamisa has condemned Zimbabwean soldiers for allegedly beating and torturing local people being deported by the South African government.

In a statement, the MDC Alliance South Africa chapter said, “We would like to condemn in the strongest terms the harassment and abuse of deported Zimbabweans by Zimbabwean soldiers at the Beitbridge border post. These are desperate Zimbabweans attempting to cross into South Africa because there are no jobs nor cheap healthcare in Zimbabwe.

“Scenes of huddled poor Zimbabweans surrounded by horse-riding, gun-totting soldiers are disconcerting. This in the midst of the fourth wave is uncalled for and illogical. Equally puzzling are beatings being meted out on the hapless deportees by the soldiers and police officers. The behaviour of the soldiers is callous and undeserved, and should therefore be stopped promptly.”

Social media is awash with photographs of Zimbabweans detained by soldiers at the Beitbridge border post amid a crackdown launched by the South African government to flush out illegal immigrants.

“We expect the clueless Harare regime to adopt a people-centred approach to deal with the migration of Zimbabweans to South Africa. The Zanu-PF government is the author of the economic and political problems ordinary Zimbabweans are running away from. How ironic is it that army officers from the underperforming Zimbabwean government are brutalising Zimbabweans for looking for greener pastures?

“The humanitarian crisis being created at the Beitbridge Border post requires both the Zimbabwean and South African governments to work together to find long-lasting solutions to this annual migration.”

The MDC Alliance appealed to the South African government to lead the Southern African Development Community in ensuring there are political, media and electoral reforms in Zimbabwe, which can create a conducive environment for the holding of free and fair elections next year.

“As long as Zimbabwe has political problems, the economy will continue to shrink resulting in the obtaining scenario at the busy border post. We reiterate that only a change of government in Zimbabwe will styme the exodus of the unemployed and the infirm from our country. The MDC-A is ready to govern and improve the economy so that good healthcare, jobs and business opportunities will be available to people of all political persuasions and nationalities. We are an inclusive party.”