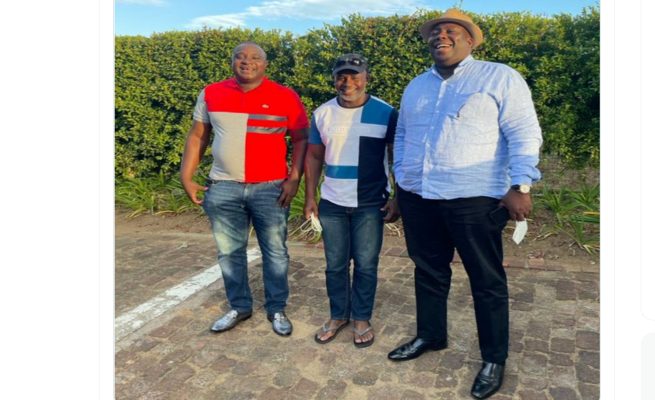 Kasukuwere, an ex-minister in the late former President Robert Mugabe’s government is in exile in South Africa along with other G40 members, who had coalesced around the former first family.

The meeting set tongues wagging as Kasukuwere is reportedly itching for a comeback to “reclaim” the party.

The former Local Government minister is reportedly being pushed by some people within Zanu PF to kick-start the process of “reclaiming the party”.

He is also accused of being behind the legal challenge by a Zanu PF youth, Sybeth Musengezi, who has taken the party to court over processes that led to Mnangagwa’s rise to power.

Pictures of Kasukuwere, Zivhu and Mliswa, have added to speculation in Zanu PF over a plot to “reclaim” the party which they say has been taken over by “ideologically bankrupt individuals”.

“Those are childish ramblings and conspiracy theories,” he told NewsDay yesterday.

He, however, took to Twitter saying: “Met two maverick Zimbabwean politicians. Interesting catching up with two comrades who have gone through a lot, and are tactical politicians. Wish them well in their political journey.”

Observers reacted to the pictures saying that a plot was underway.

Mliswa said there was nothing sinister about the meeting.

“People are coming up with all sorts of conspiracies just because we were together. I was expelled from Zanu PF by a faction involving Kasukuwere — and if anything, I should not be with him, but there is more to life than politics.

“We were not plotting anything, and I will continue meeting whoever I need to. Soon I will post pictures with Chamisa too; he is my sekuru (uncle) just like Kasukuwere or Jonathan Moyo (former Higher Education minister). The intricate web of totems links us. Now, should I shun that because of politics? No.”

Mliswa and Zivhu are strong critics of the establishment over corruption, among other issues, although they both insist that they support Mnangagwa.

“As for Zanu PF, as a party, it’s clear that it has lost itself and in its current state, it is a rogue entity which is going against the principles of the liberation struggle. It has been hijacked by a lot of mafikizolos who have no DNA of the party,” Mliswa added.

“The Zanu PF I belonged to stuck to the founding principles of the struggle. Thus on the basis of those principles I have never been out of Zanu PF. The current power holders in the party have kicked out people with the real DNA of Zanu PF,” he said.