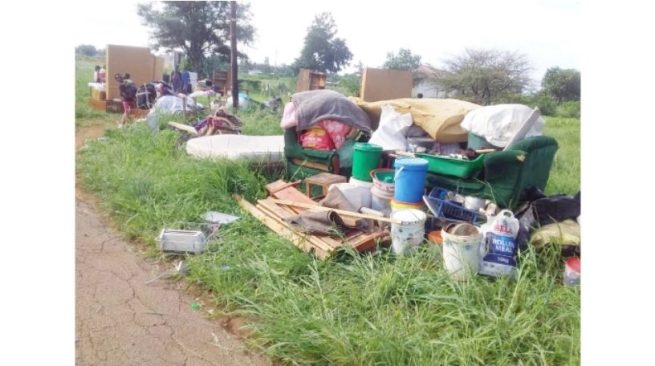 MORE than 17 tenants together with their children were on Friday evicted from a property in Kingsdale, Bulawayo which used to belong to the late National Hero, Cde Jairos Jiri.

The property situated at 39 Newmansford Avenue has been at the centre of a dispute for more than 20 years after Dr Stephen Chambwera reportedly bought it in 1996 from one of Cde Jiri’s sons, Mr Lazarus Jiri while he was still in the United Kingdom.

However, Dr Chambwera had over the years attempted to take the property but was failing as the title deeds were reportedly still in the hands of the Jiri family who disputed the alleged sale of the property.

However, on Friday, Sunday News witnessed officials from the Sheriff of the High Court led by Mr Lloyd Matera evicting the tenants. Dr Chambwera who was present during the evictions professed ignorance when he was asked to comment.

Reports, however, indicated that he attempted to take the property 20 years ago and lost the battle with the title deeds still in the hands of the Jiri family who disputed the alleged sale of the property. He tried again in 2014 with an order through the Sheriff’s office to evict the people who were residing there after the intervention of the Ministry of Justice, Legal and Parliamentary Affairs.

The affected families were left homeless after the incident, while workers who tossed out their furniture destroyed several pieces of their property as they threw it out of the house.

“We were just told the house has been sold and we were dumped here without a plan of action,” said one of the tenants, Ms Natasha Moyo.

Mr Lazarus Jiri said: “We still own the place. It was never sold to Dr Chambwera, and I never saw any papers.

“They are taking advantage because we have no one to protect us. At least he could have given us notice because as it is we are expecting heavy rains and where will these people go with their children? I am also stranded and have tried to ask for assistance from family members but nothing is happening,” Mr Jiri said.

One of the tenants, Mr Siphamandla Maphosa said: “I was at work when I received a call that my furniture was being carelessly thrown outside and when I got there, my two infants were by the road crying. I am in pain because most of my furniture is broken and where will I go with my children at this time.”

Another tenant only identified as NaPurity said: “Some of us just paid rent and we are not getting refunds. I don’t have anyone here. I am from Mutoko.”

The Sheriff, Mr Matera declined to talk to the media and referred all questions to his bosses in Harare.