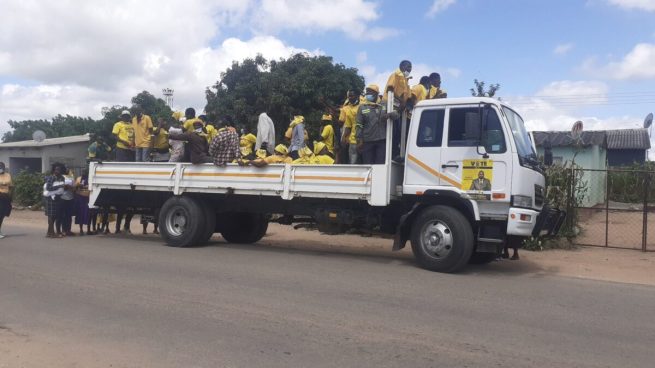 Zimbabwe’s main opposition party has said at least 80 of its supporters were arrested Saturday while campaigning door to door ahead of crunch parliamentary by-elections next month, the party said.

The Citizens Coalition for Change said they were being detained in the city of Masvingo, 300 kilometres south of the capital Harare.

“They were campaigning. The charges are unclear,” CCC spokesman Fadzayi Mahere told AFP, a day ahead of a planned rally to launch the party’s election campaign in the capital.

President Emmerson Mnangagwa last week told thousands attending a rally for the ruling Zanu PF party that no opposition would rule the country any time soon.

Police have carried out several arrests in recent days.

The CCC says 13 of its youth members were arrested on Friday in central Harare, and were due to spend the weekend in jail after a court session was postponed to next week.

The opposition claims the playing field is not level and that it is difficult to mobilise voters.

Ahead of Sunday’s rally, it has complained of strict gathering rules that include not being allowed to chant slogans, sing political songs or march in a procession.

CCC’s president Nelson Chamisa last month told AFP that his party was under constant attack from the ruling party because it was poised to win the by-elections.

Chamisa narrowly lost the 2018 general elections to Mnangagwa, in what he says was a stolen vote.

Mnangagwa came to power in 2017, replacing Robert Mugabe, who had led the country with an iron fist for the 37 years since independence.