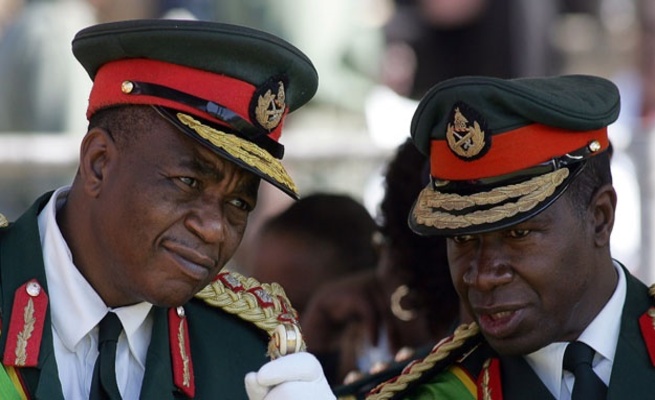 THE removal of three Zimbabweans from the European Union (EU) sanctions signals the positive strides that the country has made under President Mnangagwa’s reengagement policy.

Commenting on the latest removal of the remaining names on the EU sanctions list, President Mnangagwa who is the driving force behind the re-engagement drive said dialogue is the only way.

“Zimbabwe has made profound progress in engaging the international community.

“Action taken this week by the EU is just another example of this success. Dialogue continues to yield results,” the President said on Twitter.

This comes after the EU on Monday, announced the removal of Vice-President Dr Constantino Chiwenga, Zimbabwe Defence Forces (ZDF) Commander General Phillip Valerio Sibanda, and former first lady Grace Mugabe from the baneful sanctions, in a move that analysts canvassed by The Herald said demonstrated the softening of stance by formerly hostile nations.

The development comes after President Mnangagwa’s commitment in 2017 at the inception of the Second Republic that re-engaging and mending relations with countries in western Europe, which imposed sanctions since 2002, was a priority call.

The Herald is reliably informed that behind the scenes, Brussels is escalating diplomatic engagements with Harare and will lift sanctions in totality soon, after France said Zimbabwe was a partner in ensuring stability in the SADC region’s fight against jihadists in Mozambique’s Cabo Delgado province.

Zimbabwe and the EU have both benefited from fruitful diplomatic engagements that have seen the thawing of relations since the official withdrawal of former coloniser, Britain, from the EU bloc.

To date, only two Nordic countries are stalling the total removal of sanctions on Zimbabwe while the other members agree that besides coordinating the regional fight against jihadists, Zimbabwe is also a key partner in providing more military training to Mozambican forces.

Hubert Leclercq, a journalist from one of Europe’s influential dailies, La Libre, last week indicated to President Mnangagwa in an interview that in the past three months, 15 EU members were in favour of sanctions and now only two countries are reluctant to lift the sanctions.

While the Zimbabwe Defence Industries (ZDI) remains on the sanctions list, analysts and international relations experts said the EU was changing its reading grid on Zimbabwe and applauded the two parties for their continued engagements.

President Mnangagwa during an interview with Hubert Leclercq of the Belgian newspaper La Libre at State House in Harare recently. — Pictures: Joseph Nyadzayo

Political analyst and media lecturer Dr Wellington Gadzikwa said the absence of Britain in the EU had brought dividends to the Harare-Brussels relationship as the former colonial power used the EU as a platform to internationalise a bilateral affair.

He said the EU’s removal of sanctions was a realisation that the sanctions regime no longer worked because it has led to a breakdown of the moral fabric of Zimbabweans by negatively impacting ordinary people.

“The exit of Britain from the EU could have influenced the thawing of relations between Zimbabwe and the European bloc. This is so because Britain had dragged a bilateral affair to the EU in a view to internationalise it.

“The EU is removing sanctions upon the realisation that they no longer work. While it is good that there is headway being made, Zimbabwe also needs to dictate its terms of re-engaging the West basing on the need for self-determination as happened when it embarked on the land reform programme,” said Dr Gadzikwa.

He also said the lobbying for the removal of sanctions on Zimbabwe by France is proof that the EU has new interests that cannot be realised if sanctions are still in place.

Prof Obediah Dodo, an international relations expert, concurred with Dr Gadzikwa, adding that the lifting of sanctions by the EU is a reflection that the bloc is now a body independent of British influence.

He said the move will also shape the trajectory of Zimbabwe’s international relations amid an expectation that Britain will soon follow suit.

“This is a positive indication that shows that no conflict exists forever. At one point it will naturally die. So no matter how small Zimbabwe might be, the EU has realised it cannot do without Zimbabwe and vice-versa,” said Prof Dodo.

He also said ahead of the 2023 elections, detractors were expecting the EU to tighten screws on Zimbabwe, but the gesture to lift sanctions is the positive success of what the New Dispensation has managed to achieve in just three years.

“An expected development is borne out of this re-engagement policy id that Britain will follow suit. More positive developments are going to follow and this is a very important position for the government ahead of the 2023 plebiscite,” he added.